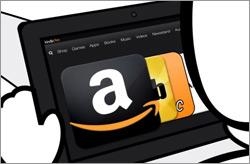 Amazon is offering app developers a new way to monetize their audiences through m-commerce by bringing the famous online storefront into their apps. Launched yesterday, the Amazon Mobile Associates API allows the developer to sell Amazon products directly to their users in the app, which can be distributed through any Android store as long as the same app is also offered on Amazon's Appstore.

The API allows any Android app to direct link to product pages at the Amazon store or to pop up specific product details that then direct them to Amazon’s mobile-optimized product page for purchase. These features are available to any Android app that is available in both Amazon’s and the Google PlayStores. For apps that are distributed within the Amazon Android store, however, the API allows a richer in-app shopping experience that includes one-click purchasing and even digital bundling that allows the developer to reward buyers with a virtual digital item from the app when they purchase a physical product.

Developers can realize up to 6% in ad fees on some qualifying purchases made within their apps, and can advertise specific products relevant to their users or include categories.

This new program in effect extends the long-standing Amazon affiliates program into apps. But it is also a part of Amazon’s larger and ongoing strategy to create a mobile app ecosystem that includes its own Kindle devices as well as the broader universe of Android Apps. Amazon also has its own mobile ad network that is extending across apps for its own devices and Android. It has also introduced its own gaming ecosystem called GameCircle as well as a virtual currency system called Amazon Coins that can be redeemed for apps, games and in-app purchases.