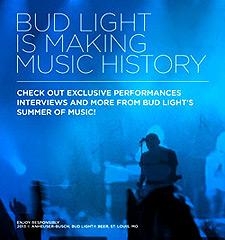 Despite a total site reinvention, and the, er, sexy backing of Justin Timberlake, Myspace is still struggling to regain its former glory. The site is attracting big advertisers, however, and their faith in the once-reigning social network appears to be paying off.

According to new data from Myspace, live-streaming events on the site generated over 2.5 million views from select 50/50/1 festival performances, while average viewership of the performances was 13 minutes per person.

As for the JKL live-stream component, more than 1.5 million viewers tuned into Myspace to watch three featured broadcast performances. For Myspace, the numbers prove it can reach broad audiences by harnessing the power of music, offering audiences unique editorial content.

“We really gave the community something,” said Lars Djuvik, vice president and director of client development at Myspace parent Specific Media. During the course of the program, Djuvik said Myspace’s editorial team produced over 85 pieces of content, including interviews with Metric, DJ Nick Catchdubs of Fool’s Gold Record and animated GIFs created by Ryan Merchant and Sebu Simonian of Capital Cities.

The effort is part of Myspace’s broader strategy to set itself apart from other digital properties by catering to musicians and their fans.

“The new site is hugely focused on music,” Djuvik said. “It really takes great partnerships to have a great music program.”

The strategy is producing ad partnerships. Along with the Music First effort, Chevrolet signed on earlier this year to support a three-day music event during the South by Southwest festival in Austin. Myspace Secret Shows, so-called, featured 10 musical performances from artists who were strongly encouraged to share their shows and festival experiences with fans.

Partly as a result, Myspace is still viewed by many in the industry as a cautionary tale, a lost cause and a “has-been.” The topic even came up at MediaPost’s Social Media Insider Summit, last week. Comparing the site to a virtual “graveyard,” Marcus Nelson, founder and CEO of social marketing startup Addvocate, asked summit attendees: “Anybody still on Myspace?!”

Responding to the criticism, Djuvik says the world of social media has changed rapidly in recent years, and the new MySpace is establishing a valuable position for itself.

“Things change,” Djuvik said. “We know we have a great platform.”

According to documents obtained by Business Insider, last year, Myspace was on pace to lose $43 million in 2012 on revenue of just $15 million. According to estimates from eMarketer, that was down dramatically from about $605 million in revenue in 2008.

Djuvik on Wednesday said he couldn’t comment on Myspace’s financial position. A representative for Specific Media said the company had no plans to release any financial data this week.