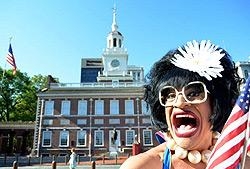 In the commercial, titled “Miss Richfield's Selfie Tour of Philadelphia,” cabaret entertainer Miss Richfield 1981 visits landmarks all over the city -- snapping photos of herself -- and some new, buff friends -- along the way.

The new ad is Philly's second LGBT travel spot, and only the third of its kind produced by any city in the U.S.

The spot's release by the Greater Philadelphia Tourism Marketing Corporation (GPTMC) is timed to celebrate the 10th anniversary of the city's original, award-winning campaign "Philadelphia--Get Your History Straight and Your Nightlife Gay."

It will air during September and October through Comcast on the Bravo and Style networks in the Philadelphia and Washington, D.C., markets, and on Logo TV nationally. Online, it will run on Advocate.com, Out.com and OutTraveler.com.

GPTMC has been a sponsor of Miss Richfield 1981's traveling one-woman shows since 2011. While on tour, she actively promotes Philadelphia to LGBT audiences.