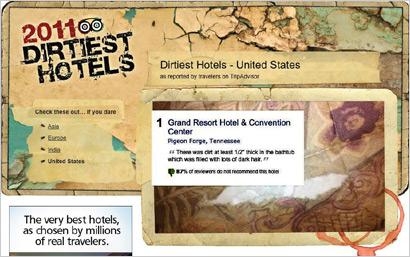 TripAdvisor did not defame the Grand Resort Hotel and Convention Center by ranking it No. 1 on a list of dirtiest hotels in America, a federal appellate court ruled this week.

The 6th Circuit Court of Appeals said that the hotel's inclusion on the “dirtiest” list was an opinion, and therefore couldn't be the basis of a defamation claim. The 15-page ruling emphasized that TripAdvisor's list was based on users' reviews, which are likely to be interpreted by readers as opinions.

"'Top ten' lists and the like appear with growing frequency on the Web,” a three-judge panel wrote in the decision, issued on Wednesday. “It seems to us that a reasonable observer understands that placement on and ranking within the bulk of such lists constitutes opinion, not a provable fact.” Only statements of verifiable facts can be defamatory.

The hotel argued that it was defamed by TripAdvisor's post. The hotel also criticized TripAdvisor's methodology, arguing that the site “used a rating system which is flawed and inconsistent and distorts actual performance and perspective.”

But the appellate court disagreed. “TripAdvisor’s '2011 Dirtiest Hotels' list cannot reasonably be interpreted as stating, as an assertion of fact, that Grand Resort is the dirtiest hotel in America,” the opinion reads. “TripAdvisor’s use of 'dirtiest' amounts to rhetorical hyperbole."

When TripAdvisor published its dirtiest-hotels list, the site posted a quote from users' reviews next to each hotel. For the Grand Resort, the quote read, “There was dirt at least 1/2 [inch] thick in the bathtub which was filled with lots of dark hair,’” according to court documents. The entry also included a photo of a ripped bed cover.

The appeals judge wrote, “no one reading the list would understand these two examples to be the determinative factors in what constitutes the dirtiest hotel in America.”

The ruling upheld an earlier decision by U.S. District Court Judge Thomas Phillips in Knoxville. “It does not appear to the Court that a reasonable person could believe that TripAdvisor’s article reflected anything more than the opinions of TripAdvisor’s millions of online users,” Phillips wrote last year.

The hotel appealed to the 6th Circuit, which upheld the trial judge's ruling.

The dispute drew the attention of the Berkman Center's Digital Media Law Center, which weighed in with a friend-of-the-court brief on behalf of TripAdvisor. Jeff Hermes, director of the organization, said it became involved due to concerns that a defamation finding could harm crowdsourced research.

“Allowing debates over methodology to devolve into defamation claims could substantially chill the advancement of research on important but sensitive issues,” Hermes wrote in a blog post on Thursday.