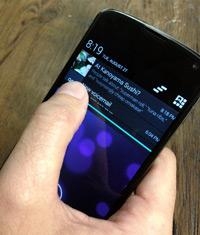 Foursquare has taken another step to move beyond the check-in by automatically sending users recommendations based on their location in the latest version of its Android app. The service will suggest nearby places to go or restaurant dishes to order, for instance, via push notifications without people having to check in anywhere or even open the app.

With its record of more than 4 billion check-ins and 32 million “tips,” Foursquare says it now has the location accuracy to proactively tell users about interesting things around them.” A Foursquare blog post announced the update rolling out to “thousands of Android users” today.

The new recommendation feature will extend to all Android users before being introduced in the company’s iOS app over the next few months.

Foursquare also promises the background location monitoring required to make relevant recommendations won’t be a big battery drain. “From our internal tests on a bunch of phones, it only increases drain about 0.7% per hour, or, over the course of a day, the equivalent of about a 20-minute game of Angry Birds,” it stated.

Through its vast store of check-ins and tips, the company further assures its own recommendations will be timely and smart. “We’re going to ping you when you sit down at a new place where your friend left a tip, not when you’re on your daily walk to work. And using this feature doesn’t check you in; this isn’t for sharing, just for making sure you don’t miss great things.”

The move expands Foursquare’s efforts to become more of a tool for local discovery and recommendations than merely about check-ins and venue “mayorships.” Even so, company investor Fred Wilson of Union Square Ventures recently criticized Foursquare for not being able to shake its perception as a check-in app. The introduction of personalized recommendations could help change that.

At the same time, Foursquare has to avoid annoying users with a barrage of push notifications that could heighten the uneasy sense of constantly being tracked. The company’s bet is that with people becoming more accustomed to location-aware apps, especially virtual assistants like Google Now, the recommendations popping up automatically will be welcomed.