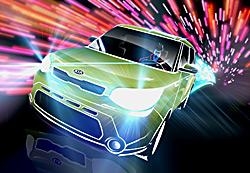 Turner has worked with Kia to create a trio of animated ads touting the automaker’s 2014 Soul model. The spots will air exclusively on Adult Swim, the network targeting young adults, at least initially.

The 30-second ads separately focus on the style, comfort and technology in the new Soul, tabbed an “urban passenger vehicle.” The first one is rolling out, with the others coming separately in the two ensuing weeks.

The aim of the ads will dovetail with Adult Swim’s animation-heavy line-up, such as “American Dad” and “Family Guy.” The exceedingly colorful “style” spot features a “Soul, the new way to roll” tag.

Adult Swim and Kia have had tried previous initiatives looking outside the boxm such as a music competition offering free downloads.

Kia also has a top-line sponsorship of the NBA All-Star game on TNT.

The automaker is a heavy sports sponsor, running Super Bowl ads and sponsoring an NBA pre-game show on ESPN.