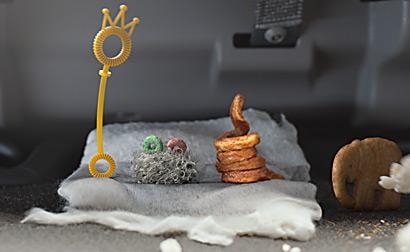 The new Honda Odyssey won the Insurance Institutes annual highway safety awards. And it has a vacuum cleaner. What more could you want? How about some assorted leftovers and stuff on the floor to test it on? A new campaign for the 2014 Odyssey via agency of record RPA touts the HondaVAC by making the riff-raff on the floor and in various van spaces into CGI characters who tout the vehicle before getting sucked up.>

Actors Neil Patrick Harris and Rainn Wilson voice a lint ball and a gummy bear (“spokescrumbs”).  There's an interesting back story on Harris' involvement -- as he tweeted Honda when they were doing a one-day Vine dealership campaign this summer, (apparently) he owns one. One thing led to another. Now he's doing some voiceovers.

The campaign also debuts a new tag, "Start Something Special." In addition to the three initial TV spots, there's a tie-in with "The X Factor" talent show, an integration with Rovio's "Angry Birds" and Zynga's Words with Friends.

Tom Peyton, assistant VP marketing at American Honda, says the cable component of the TV buy allows Honda to hone in on family-oriented media. "We will also have a good network TV and sports schedule, so we have both broad reach and targeted media covered."

Odyssey's presence on "The X Factor" starts with the Sept. 9 premiere, with the vehicle getting most of its closeups in the show's reality segments, notes Peyton. "There is a fair amount to that show not shot on the stage; a lot of it has to do with them going to performances, doing events around town."

The Odyssey is also, virtually, in "Angry Birds Star Wars" and Honda gives it a hot-spot interactive image in Words with Friends. Honda also has new custom advertising on Amazon.com, and a location-based mobile ad execution through Place IQ.

Peyton says Odyssey's sales for of the year are up over 8% and about 12% of Odyssey's sales are of the top trim model that has premium content like HondaVAC. He says he's optimistic about the take rate for the HondaVAC, partly given the buzz on it. "When we unleashed the feature at the New York Auto Show, it was the talk of the show. It got most of the headlines, it was one of the lead features. It also gives the brand a push because we get credit for being innovative."