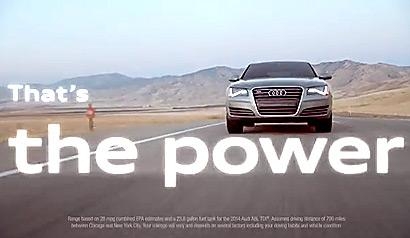 Diesel-powered cars are still a tough sell in the United States, though that will change. Also, automakers who make them -- principally european -- haven't put a ton of money behind marketing these “clean” diesel vehicles. Though they are 50% of the European market, they are just a fraction of that in the U.S. where gasoline's a lot cheaper. Industry pundits, however, see that number doubling next year with BMW, VW and Audi, not to mention Jeep, Chevrolet and Nissan adding diesel to the mix.

Audi, which brought its TDI tech to the U.S. in 2009, has also grown its lineup of TDI (turbocharged direct injection) diesel versions of the A6, A7, A8 L, Q5, and Q7.  On Thursday, Audi launched an ad campaign touting all of the vehicles, plus the engine technology under their hoods, the portfolio approach being a first for the Herndon, Va., company.

"We wanted to make a big statement that Audi TDI is here not just in one model but five models," says Lauren Angelo, director of marketing at Audi of America. He tells Marketing Daily that the campaign makes it clear that "you have a whole host of choices depending on your needs and preferences."

The television, print, digital and social campaign touts the cars as clean, great on range and mileage, powerful and fun.

The TV spots -- with online versions -- comprise a 60-second spot and two 15-second ads. One spot shows how the car can let you drive from New York to Chicago on a single tank of gas. Another ad makes the point that the new diesel technology is ahead of the curve and free of the need compromise.

Angelo says that the perception about diesel being invidious and malodorous isn't much of an issue now as the brand has a sizable base of very knowledgeable tech-focused consumers who do their homework. "We think that sets Audi apart. We have among the lowest median ages for luxury buyers, and we know luxury consumers are seeking out alternatives partly because of environmental concerns.” He adds that younger consumers don't have preconceived notions of clean diesel; they didn't experience the late ’70s/early '80s products that were smelly and noisy. “They are focused on the story about clean diesel."

The campaign goes online to deal with those issues, including availability of service stations selling diesel fuel -- with four video shorts. They roll out over the next two months on Audi’s YouTube channel, on The Washington Post's site, and Slate.com in a custom user-generated content hub through Oct. 31. The hub also has custom videos, articles and infographics, and social media elements.

The company launched its first diesel ad in 2009, with creative focused on fuel efficiency translated to barrels of oil not imported from OPEC. "With older consumers, with boomers, we don't have to have conversations with them now about foreign oil. That was big in 2009 when we introduced the diesel Q7. Now they are interested in benefits," says Angelo.

The company says it has sold 26,000 Audi TDI vehicles have been sold in the U.S.