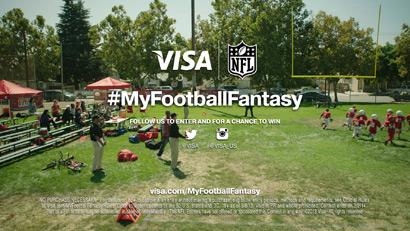 In its 18th year of partnering with the National Football League as an Olympic sponsor, Visa USA is looking to give football fans the experience of their dreams.

In a campaign that kicked off with the first Sunday of NFL games, the company is encouraging fans to share their football fantasies on Twitter and Instagram using the hashtag #MyFootballFantasy. Company executives will manage the tweets and make a few of them come true.

The company, which has been an NFL sponsor since 1995, kicked off the campaign with a television commercial that depicted San Francisco 49ers head coach Jim Harbaugh yelling at a bunch of peewee football players. What initially looks like a professional coach taking things a bit too far (“Nobody’s tackling anybody!” he screams at one point) is later revealed to be one fan’s dream: To have Harbaugh coach a peewee team.

Experiences seem to be the name of the game for this year’s football season. Earlier this month, Lenovo launched a fantasy football-oriented campaign through which one winner will have a chance for a true coaching experience, helping draft players for the 2014 Pro Bowl and walking the sidelines for the first half of the game.