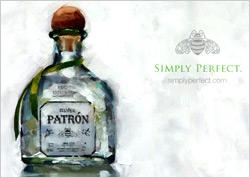 Patrón Tequila is debuting a new series of TV ads as part of its "Simply Perfect" integrated campaign, which launched in June in print and out-of-home.

Two of the four new 15-second spots, from Cramer-Krasselt/New York, debuted on CBS's "Chelsea Lately" on Sept. 5, and two will air on CBS's "Person of Interest" on Sept. 10.

The TV ads will run through at least the holidays, on networks also including NBC, FX, CNN, Comedy Central, E!, the Travel Channel and Fox Sports 1.

The new campaign seeks to differentiate the ultra-premium Patrón from other white spirits.

The TV ads mirror the print and out-of-home creative, pointing up the brand's attention to detail by focusing on its quality ingredients, distilling technique and unique, handcrafted bottle.

One of the new TV spots shows an X-ray of a Patrón bottle. Message: "There's nothing inside but Weber Blue agave from the highlands of Jalisco, Mexico."

A second shows an artist painting "a hand-made picture of a hand-made bottle containing hand-made tequila."

Another emphasizes that every bottle of Patrón is handcrafted in Mexico, and "the finished product is coveted worldwide."

The fourth points out that "like all great works of art, every bottle is hand-signed and numbered. No two are exactly alike."

All of the spots end with the message: " Patrón. Simply Perfect."