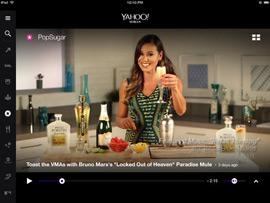 Yahoo on Monday launched an app version of its Screen video hub for iOS devices in connection with the announcement of its comedy fall lineup. The new app, and an updated Yahoo Screen desktop site, includes its original comedy series and clips from "Saturday Night Live" obtained through an agreement with Broadway Video in April.

In addition, Yahoo has signed a new licensing agreement with Viacom that brings clips from Comedy Central show "The Colbert Report" and "The Daily Show With Jon Stewart" to Yahoo Screen, with material from "South Park" and MTV News coming in October.

Yahoo is also rolling out all episodes of the eight original Web series it first announced at the Digital Content NewFront, including Jack Black in “Ghost Ghirls,” John Stamos in “Losing It With John Stamos,” Ed Helms and Zachary Levi in “Tiny Commando” and Cheryl Hines and Rachael Harris in “We Need Help.”

In all, Yahoo says the new app and refreshed site offer more than 1,000 hours of comedy and 5,000 clips, including the entire clip archive of SNL over 38 seasons.

The Yahoo Screen app for iPhones, iPods and iPads will play video clips automatically when opened and will move continuously from one to the next. Content is categorized into channels including comedy, sports, food, celebrity and gaming, and scrolls horizontally rather vertically. It also features channels dedicated to Yahoo partners like ABC News and Martha Stewart.

The Yahoo Screen app launches without advertising. Bart Stein, a Stamped co-founder who is now manager of emerging products and technologies at Yahoo, told Mashable the company is still looking for the most engaging video ad formats to use.

A Yahoo spokesperson said the company is testing the frequency pre-roll ads on the desktop site, with viewers typically able to watch several clips before seeing an ad. Energizer is serving as presenting sponsor of “Tiny Commando,” which includes product placement throughout the show.