'Breaking Bad' Reminds Us Of The True Power Of TV 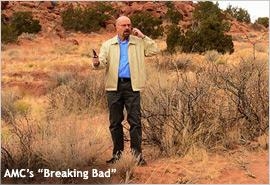 We have lately been led to believe that the oldest way of enjoying television isn't necessarily the most powerful. By that I mean the traditional approach to watching a series -- one show at a time, as it is telecast, with a span of a week or more between each episode.

I disagree. Just consider the state that fans of “Breaking Bad” have found themselves in this week. Those who watched last Sunday's episode are half-crazed right now with anticipation for this weekend's show … and they have no choice but to surrender and watch AMC on Sunday at 9 p.m. ET. That's the impact of a cliffhanger as thrilling as the one at the end of last week's pulverizing hour. Bullets were flying, characters were in danger and the overwhelming certainty that one or more of them would die was palpable.

In my humble opinion, the arrival of this Sunday’s episode is not the occasion for a DVR. Rather, it calls for a real-time TV experience of the kind people over 40 remember so well. There’s nothing quite like it. It certainly beats the binge. Not that binge viewing is an inferior thing -- under certain circumstance it can be a lot of fun. But generally speaking, when did watching a favorite show become a prolonged, time-consuming task, rather than a quick and simple pleasure to be savored over a long period of time?

I understand many people choose to binge on “Bad.” Better a “Bad” binge than no “Bad” at all, but it can’t be as much nerve-frying fun as living with it and taking it in prescribed doses. (I’ve heard from a number of people who hungrily devoured Netflix’s “Orange is the New Black” that they now feel as if they ate too fast. They want more -- but they’ll have to wait until later next year for a second helping.

As “Bad” reminded us last Sunday, cliffhangers are meant to tantalize -- and then make us wait. I’ve enjoyed more of them than I can recall during many decades of television watching, although it seems to me most have occurred at the very end of actual season finales, rather than at the end of random in-season episodes. I remember a surprise cliffhanger in the middle of the fifth season of “Knots Landing” in which it appeared that Gary Ewing, the central male character on the show, had been shockingly gunned down in its final moments. I gasped. Everyone with whom I was watching gasped. We could hear people who lived in the apartment upstairs gasp.

Certainly “Knots” wasn’t the only prime-time serial that doled out edge-of-your-seat cliffhangers. (As you may recall, “Dallas” was outstanding in that capacity.) More recently, the Showtime dramas “Dexter” and “Homeland” have proven especially adept at not only shocking viewers out of their seats at episode’s end but leaving them wondering how the protagonists involved in such seemingly calamitous developments would make their way out of whatever harrowing situations they had been left in.

This week’s episode of “Breaking Bad” was in no uncertain terms a killer, especially at the end. (I don’t really feel that a spoiler alert is necessary here, because even though a lot happened in the episode’s final minutes, nothing was really finalized when the screen went black. But if you haven’t watched it yet, you might consider skipping to the next paragraph.) It felt for all the world like the actual series finale, although viewers knew it couldn’t be, because there are three more episodes to come before “Bad” breaks for good on September 29, and because we all know from a flash-forward earlier in this half season that Walter White isn’t dead. Clearly, Walt will survive the torrent of gunfire that exploded around him in the final seconds of the episode, but what about the other guys?

Yes, I watched “Bad” as I often do -- in real-time. I waited patiently through each commercial break for the action to resume – and I actually watched all the ads. They included spots for the BMW Mini, Taco Bell’s Fiery Doritos Locos Tacos, the Nokia Lumia 1020, the 2013 Lincoln MKZ, Hotels.com, Burger King’s French Fry Burger, GoPro Cameras, Miller Lite and Men’s Wearhouse, among others, so many of them so effective and cinematic and so easy to watch that they should be required viewing at many of the agencies featured this season in AMC’s “The Pitch.”

The commercial breaks served to intensify the growing tension and sense of impending doom that throbbed throughout the episode. In other words, watching “Bad” in that way somehow made the viewing experience richer, just as making me wait to see what happens next has me counting the hours until Sunday night. That’s a good thing.

tv
3 comments about "'Breaking Bad' Reminds Us Of The True Power Of TV ".
Check to receive email when comments are posted.
Read more comments >
Next story loading