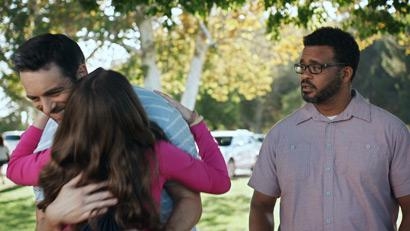 Citi posits that even making a tween girl’s concert fantasies come true can be less painful when using its “Thank You” rewards cards, which now come with double points for dining and entertainment expenditures.

In a new television commercial breaking this week (from Publicis Kaplan Thaler in New York), a tween girl approaches her father with the exciting news that Katy Perry will be playing an upcoming show. He agrees to buy tickets for her, several of her friends and his older daughter.

When the dad’s friend incredulously asks what he’s doing, he explains that he’s earning double points for each ticket purchased. The dad’s friend then asks to go along as Perry’s new song, “Roar,” plays to conclude the commercial.

In addition to the Katy Perry spot, Citi will also release two other commercials that illustrate the double dining rewards (regardless of whether the food purchase is made at a fine-dining establishment or a diner). There will also be a series of print and digital ads supporting the campaign.

“We’re really just trying to create excitement and [show the] appeal of our Thank You product through these commercials,” Jennifer Lindauer, senior vice president and director of advertising for Citi, tells Marketing Daily. “What we want to do with all of our advertising is to create a relatable [experience], and we want to do that through humor and storytelling.”

The campaign is timed to take advantage of the fall television season, with the first spot breaking during the Fox premiere of “Sleepy Hollow.” Outdoor ads will run at locations such as the Grove in Los Angeles and Citi Bike installations in New York City. Citi will also work with media in the dining and entertainment space such as Bon Appetit, Live Nation and AOL for other marketing opportunities.

“Dining and entertainment are very relevant to our target audience, and [points] accelerators are very important to our customers,” Lindauer says.