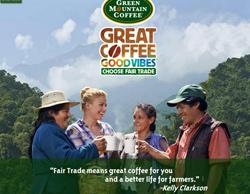 Green Mountain Coffee has recruited Grammy winner Kelly Clarkson for an integrated campaign running during October, which is designated as Fair Trade Month.

Green Mountain is expanding on the concept of a campaign it ran last year, with the goal of educating and inspiring consumers to purchase Fair Trade Certified products.

The Green Mountain brand offers one of America’s largest selections of Fair Trade Certified coffee. Its parent, Green Mountain Coffee Roasters (GMCR), has been acknowledged by Fair Trade USA as being the world’s largest purchaser of fair trade coffee for the past three years.

For this year's campaign, "Great Coffee, Good Vibes, Choose Fair Trade," Clarkson visited a coffee farm in Peru (one of the countries where GMCR buys Fair Trade coffee) to experience how fair trade has benefited a coffee-farming community.

Clarkson is sharing that experience through a travelogue (including photos and videos) on ChooseFairTrade.com and the brand's Facebook page. She's also posting about the campaign on the brand's Twitter account.

Clarkson will perform a concert for the campaign in New York City on Oct. 10, during which she'll talk about her experience in Peru and perform some of her most popular songs -- including one song chosen by fans on the Green Mountain Facebook page.

The concert will be streamed live on the Facebook page. Fans can RSVP for the event at Facebook.com/GreenMountainCoffee.

Fans can also visit the brand's Facebook page to to enter a sweepstakes for a chance to win a trip for two to attend the October concert.

The Fair Trade tab on the Facebook page also offers a $1 coupon for Green Mountain Coffee.

It's getting added exposure via a People.com article about Clarkson's trip to Peru (which mentions the campaign high up in the story).