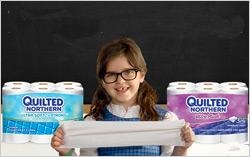 This will surprise a lot of people: digital and tech companies are not the ones that did the best job of growing the strength of their brands over the past three years. Rather, household brands -- often the ones fighting to maintain a distance above commodity purgatory -- showed the most vim and verve: Quilted Northern, Jockey and Dawn did the best job among all other brands of building brand equity, according to Landor's "Breakaway Brands Study," a look at how brands’ strength changed between 2009 and 2012.

The global brand consultancy and Y&R unit found, in fact, that the only digital-era brands to see big growth in equity were Amazon and its Kindle unit. Apple fell off the list entirely. Just to be clear, Landor isn’t measuring -- or ranking -- brands on size, sales, or even awareness per se, but on the delta, over the three-year period, of their brand equity. Mich Bergesen, Landor's global director of financial services, who led the study, tells Marketing Daily that the study measures some 2,500 to 2,700 brands (above the 25th percentile in awareness) in the U.S. excluding those whose equity vacillated during the period.

"For the last several three-year periods the list has been dominated by tech brands like Facebook and Skype and Google, and lots of online experience brands," says Bergesen. "The last time we saw so many household names was five or six years ago." He says the shift back to household goods tracks the slow recovery from the recession. "And as tech brands have matured, they have dropped off the list."

Quilted Northern went to number one on insights from strong market research. Its successful three-ply Ultra Plush product launched in 2008 was an extension based on data suggesting women over 45 would pay more for a premium product. The brand posted a 1,000% increase in strength between 2009 and 2012, per Landor.

Jockey, coming in second in the list, saw improvement because of brand extensions -- its Staycool and its antimicrobial Jockey Sport line. So did Dixie, which moved up to seventh place by expanding beyond paper cups to super-strong products. "They are an example of a brand that took action to change the conversation: they fulfilled a need for a line of ultra-strong but attractive paperware for outdoor use; it's a company that spotted a market need and delivered either strategy or product that filled that need."

Dawn saw its star rise to number three because of its reputation for being socially responsible after the company donated Dawn to clean animals after the 2010 Gulf of Mexico spill (a disaster that didn't too much good for BP's own brand equity.)

Amazon was the one digital brand that made it on the list because of its savvy at targeted engagement via its Prime program that gives members relevant perks and products. Jockey also benefited in that category because of its Twitter campaign that encourages users to hashtag their workout updates with #everydayathlete, notes Landor.

Landor put Apple and Keurig, Reynolds Wrap, Microsoft Windows, and Ford Sync on its “Watch List," meaning their brand strength is tenuous: they are either heading up or down.