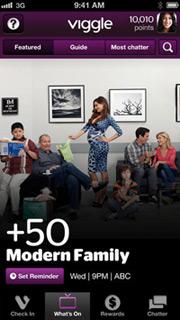 The TV loyalty app company Viggle posted improving revenue for its current fiscal year -- and a growing base of advertisers.

For its year ending June 30, Viggle posted $13.9 million in revenue. For the first five months of its operation -- Viggle launched in January 2012 -- the company took in $1.8 million.

In its last quarterly reporting period ending in June of this year, Viggle's fiscal fourth-quarter revenue was $4.6 million -- up from $1.2 million in the fourth quarter 2012.

For TV networks, Viggle says its app drives consumer to discover new shows and offers reminders to tune in and further show engagement.

Viggle is a free loyalty program for TV rewarding its members for watching TV shows. Viggle members get rewarded for their TV time from places including Best Buy, Papa John’s, Fandango, Hulu Plus and Groupon.