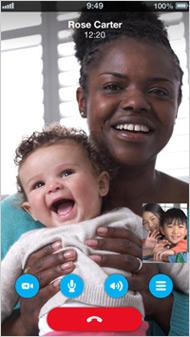 With nearly a third of its 300 million monthly users accessing its calling and video chat service via mobile devices, Skype is ramping up mobile advertising. The Microsoft unit on Tuesday announced rolling out advertising for the first time in its Android app, as well as adding rich media formats for the iPhone.

The rich media unit is available for the iOS app in the U.S. Canada, Australia, Brazil, Italy, Spain, Germany and France. It will extend to Android later this month in the same countries along with Russia. Standard mobile ads in Android will be offered in a total of 55 countries spanning the Americas and EMEA and Asia-Pacific regions by the end of September.

The new rich media unit starts as a 320x50 mobile banner and expands to 320x416 when users tap on the ad. It comes with a variety of options including video and animation, image carousels, Web links, game play, and social media features.

“Today’s news underscores our commitment to expanding the creative possibilities and global reach of the Skype mobile advertising platform,” stated a blog post by Lovina McMurchy, general manager of Skype Advertising. She noted that Ford and Telefonica are among the first brands to run rich media campaigns on Skype for iPhone.

Ford used the rich media ads to extend its Fiesta Movement campaign to mobile in the U.S., while Telefonica used the formats as part of a cross-platform campaign in Germany for the launch of its LTE network.

McMurchy also pointed out that at certain times of day now, more people are using Skype from their phone or table than a PC. And each month, the rate of new users on a phone or tablet is twice that of what it was the prior year. Mobile users make up about half the total of new Skype users joining each month.

“For marketers, that growth represents an amazing new channel to reach their customers where they are spending their time,” she wrote. While making a strong pitch for mobile marketers to buy into Skype, the company has historically been careful about expanding advertising for fear of alienating loyal users.

It introduced advertising only two years ago, just prior to its May 2011 acquisitions by Microsoft for $8.5 billion. Standard banners began appearing in the iPhone app in fall 2001, and last year Skype launched “conversation ads” for desktop Windows users.