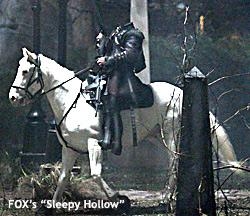 With the TV season’s start still a week away, Fox got some big news from its scary new drama “Sleepy Hollow."
Posting a strong Nielsen 3.5 rating/9 share among 18-49 viewers -- the best-rated show of Monday night -- “Hollow” became the strongest drama start since "Revolution" premiered on NBC a year ago. “Hollow," which ran in the 9 p.m. time period, is Fox’s highest-rated fall drama premiere in six years.

For the most part, “Hollow” did it without much help.

While “Revolution” rode the coattails of “The Voice” for most of last season, “Hollow” over-delivered its lead-in 8 p.m. “Bones” season premiere, which posted a 2.3/7.

ABC’s “Dancing with the Stars at 8 p.m. started off its new season with strong numbers as well -- a 3.1/9, which was virtually even with its spring season start and up over 20% from its fall premiere in 2012.

CBS had the next-best results with the season finale of its summer hit “Under the Dome” at 10 p.m., which earned a 2.8/8, up around 30% from its last episode and its best showing since late July.

Among other original programming, NBC’s “The Million Second Quiz” at 8 p.m. continues to suffer at a 1.0/3. Later on evening on the network, “American Ninja Warrior” did better at a 1.5/4. But NBC’s “Siberia” could only muster a 0.6/2.
CW’s season finale of “Breaking Pointe” offered up a microscopic 0.2/0 and 430,000 overall average viewers.