Wall Street traders have their "Bloomberg terminals" -- and now Madison Avenue's have their AdFin dashboards. Taking yet another page out of the financial industry’s trading systems, a team of ad technology vets are launching a new kind of data management platform -- not one that organizes data on audience attributes, per se, but on the supply-and-demand associated with the buyers and sellers trading them in real-time.

The goal of the platform is to tape open-market data from exchanges and real-time bidding systems to provide “transparency” on what the real-time supply-and-demand of audience inventories are trading at. Not surprisingly, the dashboard looks a lot like Wall Street’s with market indices and tickers reflecting trades for various online audience segments.

AdFin’s goal is to remain neutral, providing equal access to the buy- and sell-sides of the online trading marketplace in a way that’s similar to Wall Street market data suppliers such as Bloomberg, Dow Jones & Co. and Reuters.

Gooberman says AdFin is a logical next step for the programmatic marketplace, giving traders on both sides of the bidding table the ability to have a common yardstick for basing their decisions.

“We provide our traders with all available tools in the market into dissecting exactly what impressions they are buying. AdFin’s fast processing along with clean [user interface] allows the traders to exploit all canyons in the exchange. At scale, with ease.” 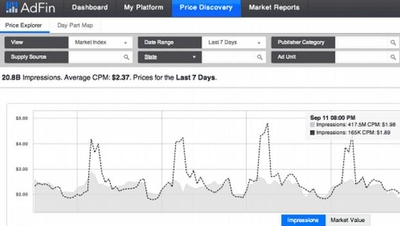