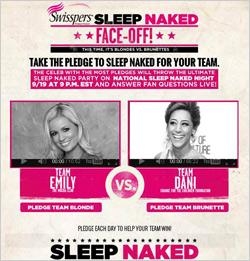 Are you ready to sleep naked?

Thursday marks the grand finale in the Swisspers Sleep Naked Face-Off, a social campaign to get people talking about the health benefits of removing their makeup before going to bed.

Says one online ad for the cotton round manufactured by U.S. Cotton, the nation’s only manufacturer of organic cotton: “Removing your makeup at night may help prevent wrinkles. Sleep Naked.”

“We knew we wanted a blonde and brunette who were influential in fashion and beauty, well-known, recognizable and current,” Shawn Engler, assistant product manager at U.S. Cotton, told Marketing Daily.

With balloting complete on Tuesday, Emily Maynard, a Southern blonde from ABC’s “The Bachelor” and “The Bachelorette,” ran a distant second to the Jersey girl, brunette Danielle Jonas from E’s “The E! Reality Show” and “Married to Jonas.”

Each have been using Twitter, Facebook and Instagram postings to cultivate their team. Hashtags #sleepnaked #swisspers #teamemily and #teamdani supported. The winner hosts the National Sleep Naked Night virtual party at 9 p.m. Eastern, and will answer beauty questions through Twitter and Instagram video.

Post-event advertising runs mid-September through mid-December on Walmart.com and Amazon.com. That message shifts to: “Some wrinkle removers cost $100 an ounce. This one costs pennies.”

While there was no specific messaging in-stores to accompany the campaign, additional stock of the cotton round have been added, Engler says.

Swisspers has a 27% share of the national cotton rounds market.