'Get Crackin' Amps Up Edginess With Rodman Spot 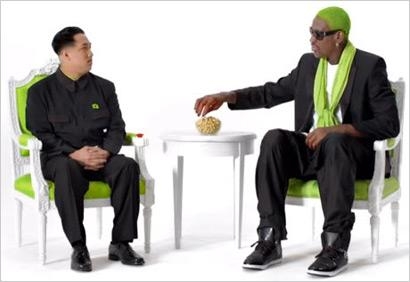 Wonderful Pistachios is betting that the buzz benefits of using controversial NBA champion and Basketball Hall of Famer Dennis Rodman in a particularly edgy new entry among its latest series of "Get Crackin'" videos/TV spots will outweigh any potential for alienating those folks who view Rodman as...well, kind of a nut case.

Indeed, the 15-second spot goes for shock/humor value precisely by playing on the "nuts" angle -- spoofing Rodman's trips to North Korea and meetings with dictator Kim Jong Un (for what Rodman has described as "basketball diplomacy") in over-the-top fashion.

Rodman, shown sitting next to a Kim look-alike actor, declares that "the secret to world peace is...pistachios." "Kim" then gleefully presses a button, exploding Rodman in a puff of smoke. Ending voiceover: "Dennis Rodman does it because he's nuts."

The Get Crackin' campaign has verged beyond pop stars and culture on previous occasions -- notably, with a spot that satirized last year's Secret Service Columbia prostitution scandal. But this time, making light of potential nuclear warfare seems to be succeeding at upping the buzz level, or at least at needling the media into taking aim at an irresistible target.

For instance, The Washington Post's Alexandra Petri, writing about "Dennis Rodman's weird, terrible, un-Wonderful pistachios commercial," put her own tongue-in-cheek spin on it by wondering "what wrong" she must have committed in her past to be stuck writing about Rodman, and this commercial in particular.

"I’m not sure why Wonderful Pistachios thinks associating [pistachios] with all my least favorite public figures will increase sales, but I guess they know something I don’t?," Petri observed. She added: "My idea of what would help sales is pretty much the opposite of this ad, so possibly an ad from Rodman saying, 'I’m going to stay out of world politics. Have a pistachio!'"

Wonderful's Twitter fans, on the other hand, have thus far shown relatively little interest in tweeting about the Rodman video (positive or negative) -- although Rodman and the brand have posted several tweets promoting it.

Wonderful did post one tweet noting: "The #getcrackin campaign has a long history of parodying events. We definitely don't mean to endorse a political view."

Other than that, the brand's public comment has been limited to a general statement in its press release about the new series of Get Crackin' ads, from Marc Seguin, VP of global sales and marketing for Wonderful parent Paramount Farms: “Our brand is known for leveraging pop culture icons, internet memes and YouTube sensations, and this year will be no different. We know what type of entertainment our audience wants and there’s definitely something for everyone with this year’s cast.”

As for those other new 15-second videos, one features Joanna Rohrback, the woman who gained fame when her "Prancercise" fitness video went viral. Another features a pistachio-cracking elephant (elephants are "tired of peanuts"). And two others intercut humorous pistachio-cracking twists with footage from "King Kong" and "Psycho."