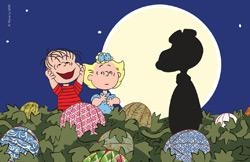 noopy and the Peanuts gang in its new ad campaign.

The ads will debut in a billboard in Times Square in September, and will be featured in October issues of shelter and lifestyle publications, as well as online in animated digital creative.

In the new ads, Snoopy and the Peanuts gang are featured as part of the long-running “In A Waverly World,” where life’s everyday objects are made more beautiful when re-imagined in Waverly designs.

Snoopy appears with Sally and Linus in his signature pumpkin patch with Waverly patterned pumpkins, and atop his iconic doghouse, which also bears a Waverly design.

In addition, the online digital version will feature an animated doghouse which switches from one Waverly pattern to another.