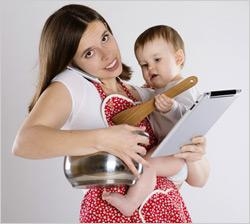 Women are bringing in a bigger and bigger slice of the household income pie. Marketing firm Boston Consulting Group (BCG) says the gap between what men and women earn is closing by 1% per year, with 60% of women in the U.S. active in the work force.

The firm, however, finds that marketers aren’t taking that growing buying power too seriously. It has come out with its first global examination since 2009 of women as consumers. "Women Want More: How to Capture Your Share of the World's Largest, Fastest-Growing Market" is the study’s baroque title, but women are anything but, per the study’s data. The firm notes that women are forecast to add $6 trillion in additional earned income over the next five years.

But consumer-facing companies just aren’t acting on the obvious: women spend are not only becoming better educated than men, but are also spending like it. So marketers might want to add a dash of this data to their marketing mix: over the next five years, working women will drive an increase in earned income globally from $12.5 trillion to $18.5 trillion. The global average of female earned income is expected to rise by about $8,000 during this period, per the study.

Michael J. Silverstein, a BCG senior partner, says women's increasing economic influence is driven by several trends: they are the majority of undergraduates worldwide (57% of students in college or higher education in the U.S. are women); younger women are entering the workforce "with no limits on their ambition," said Silverstein; they are increasingly well off and very profitable customers; they are willing to pay more across many categories for products and services; as they become increasingly time constrained, they will trade money for time savings.

The 10 categories women are most dissatisfied with are, starting with the worst, home remodeling, work clothes, home cleaning, physicians, lingerie, hospitals, cars, insurance, formal attire, and cosmetics. Five years ago at the bottom of the barrel were financial services, health care, and consumer durables (including cars.) Women cite poor product design for women; clumsy sales and marketing; inability to address need for time-saving solutions; inability to provide meaningful hook and differentiation and failure to develop community.

The study also notes that women -- like men -- are stuck in a time management bog with demands like household and finances dragging them away from time for themselves. Here's a shocker (not): worldwide, 40% of men rarely or never help their wives with home chores. It's a shocker because the number is probably closer to 98%. Brazil tops out at 63%. The United States and United Kingdom both are at the lower end of the spectrum, with 41%.

Silverstein argues that companies that have figured out what women want have grown sales, loyalty, and category dominance. Baby brand Gerber, he notes, has done well by expanding its product line based on research into what mothers want for their young children; Procter & Gamble's Swiffer makes floor work faster and less labor intensive; Victoria's Secret continually changes its undergarment line. The Limited also gets a kudos in the study.

"Women are still burdened by having to manage the family finances, with not enough money, not enough time, and too much stress. Winning companies will address their dissatisfactions with bull's-eye responses and gain the lead in both current female-controlled spending and incremental spending," he says.

"Young Mother with Baby and Tablet" photo from Shutterstock.