I just returned from Google’s Zeitgeist conference and my head is still spinning.

What I took away from this “event” or “experience” (conference really doesn’t do it justice) was – ala the movie, “As Good as it Gets”: it made me want to be a better man.

I want to do better.

I can do better.

I need to do better. 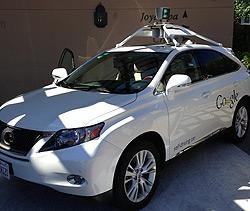 Coming into Zeitgeist, I was telling all of my friends and family about the test drive and I was surprised that their reactions were all pretty much the same as you’d get in the boardroom of a corporation or the corner office of a senior executive: concerns, skepticism and doubt.

As a sidebar, whenever I talk to someone who, right off the bat, starts with, “my concern is…”, I want to throttle them. It’s like finger nails on a chalkboard. I almost want to say to them, “why don’t you tell me what you like about this idea, before you pile into what you don’t….”

The concerns raised were about machine failure, man vs machine (for example, will the self driving car be able to plan for human error or unpredictable human actions) or insurance (whose fault is it if the car is involved in an accident?)

I suppose they’re all legit, but honestly all of this went out the window (pun not intended) when I sat in the back of the car and witnessed history. As one executive put it, “I forgot to be nervous.” Brilliantly articulated. I honestly never was nervous for a second. I was too enamored with the coolness of the opportunity, smoothness of the ride and the unobtrusiveness of the technology inside the car itself…although there was one big giant red button that I was told was the manual override, but I suspect it could have been an ejector seat for a rider that asked too many questions…

The real light bulb moment for me came somewhere in the middle of the ride. The real story was not about machines replacing man. It wasn’t about self-driving cars versus human drivers. It was about the blind; the handicapped; the elderly; the youth; the inexperienced.

(On a less profound note as someone pointed out to me, this will also revolutionize foreign travel and the entire car rental industry.)

This is the real story here.

It’s about reframing the conversation entirely. It’s about transformation. It’s about reserving judgment on ANYTHING (and I mean ANYTHING) until you’ve tried it out yourself and formed your own opinion.

I challenge each and every one of you to eliminate the word “concern” from your business and even personal lexicon and instead, roll up your sleeves and experience a new technology, platform, partnership or idea for yourself before forming a judgment.
automotive, commentary, google
5 comments about "Never Say Never. Again.".
Check to receive email when comments are posted.
Read more comments >
Next story loading