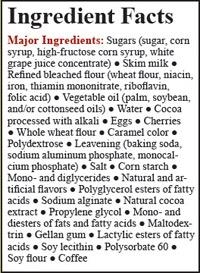 Newly proposed federal legislation seeks to create a single, standard front-of-package (FOP) label, require greater disclosure of sugar and caffeine content, and define how common claims such as "natural" and "healthy" can be used.

The legislators and representatives from the Center for Science in the Public Interest and Consumers Union held a press conference today to unveil the bill.

The bill's sponsors argue that major labeling requirements, last updated in 1990 (or in some cases in 1938), are in need of major changes to deliver the consistent, clear information that Americans need to combat the obesity crisis and make healthier choices.

*Require that any product using the "whole grain" claim conspicuously post the amount of whole grain (as a percentage of total grain) on the label.

*Require the daily values for calories and sugar, as well as the amount of any artificial sweeteners, to be listed on the Nutrition Facts Panel.

*Require any product containing an amount of food reasonably consumed on a single occasion to state on the label that a single package contains one serving size.

*Require disclosure of the amount of caffeine in the product, if it exceeeds 10 milligrams.

*Require the Secretary to issue comprehensive guidance for industry clarifying the scientific support needed to prevent false or misleading information for a "structure/function" claim for a conventional food. (Detailed guidance on this already exists for dietary supplements, which are not addressed in this new bill.) The law would also give the Secretary the legal authority to compel food companies to turn over their substantiation documents.

(A mock-up of the how the revised Ingredients Facts label would look under the proposal is shown above.)

Based on history, the proposal is bound to set off another round of battles between its backers and food makers.

In 2009, Congress directed the Institute of Medicine (IOM) to undertake a study of FOP labeling and recommend a standard FOP system. The FDA also announced that it would be putting forward regulations to define scientifically-based nutrition criteria for FOP labeling based on consumer research and the IOM's findings. The IOM published a final report in 2011 recommending the development and implementation of a standard FOP system for all food products.

The industry program -- originally called Nutrition Keys, then changed to Facts Up Front -- has been rolling out for the past four years. As of last month, GMA estimated that 70% to 80% of participating member companies, which include the country's major food marketers, would have Facts Up Front labels by the end of the year.

Nutrition advocacy groups contended that the Facts Up Front system adds little of value in informing consumers, and could actually further confuse them by allowing companies to highlight positive, marketable nutrients like fiber and protein, rather than listing only calories, saturated and trans fats and sodium content, as IOM had recommended.

Some characterized Facts Up Front as a way to stave off an FDA system (IOM seemed to favor a system that would actually rank foods on nutrition value, using stars or some other method).

In response to the Food Labeling Modernization Act bill, the GMA issued this statement: “The food and beverage industry is committed to providing consumers with the products and information they need to achieve and maintain a healthy lifestyle. Based on our preliminary analysis of this legislation, we are very concerned that it could have serious unintended consequences on a variety of products and will only serve to confuse consumers. GMA agrees with and supports federal laws requiring food labels to be truthful and non-misleading. There is a robust regulatory system in place to ensure the accuracy of information found on a food label. The accuracy of this information is further supported by the ongoing commitment by food companies to communicate with consumers in a way that is clear and accurate.”

Meanwhile, on another food battle front, restaurants, vending machine companies, grocery retailers and others continue to lobby hard to influence the specific guidelines now being written by the FDA for the new law that will require chain restaurants with 20 or more locations--and possibly grocers, movie theaters and other venues--to post food calories and nutrition information.