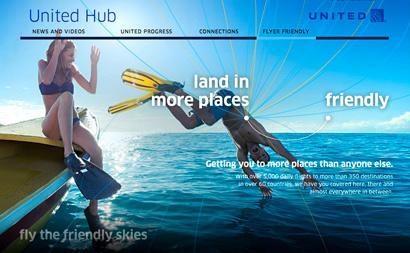 The campaign is the airline's biggest in more than a decade. It is based on feedback from customers that "user-friendly" today means the combination of service, technology and product enhancements. United has designed its investments in its global route network, new aircraft, onboard features, customer service and digital channels to be "flyer-friendly."

"'Flyer-friendly' resonated in feedback from our customers and co-workers," said Tom O'Toole, United's senior vice president of marketing and loyalty and president of MileagePlus, in a reelase. "Our new brand campaign expresses the customer focus of all of United's investments."

The new campaign includes network, cable and spot television, radio, magazine, newspaper, out-of-home and digital advertising, plus social media. All of the United co-workers shown in the advertising are actual United employees.

TV features Gershwin's classic "Rhapsody in Blue," the musical score for United since 1987, and are narrated by actor Matt Damon. They began airing nationally on Sunday - including during NFL football, the PGA Tour Championship and the Emmy Awards -- and continue throughout the week during the prime-time premieres of popular network shows like "Modern Family" and "Saturday Night Live."

The first television spot, Orchestra, introduces "flyer-friendly" and features musicians playing "Rhapsody in Blue" while seated on a United aircraft. The spot showcases the space available in United BusinessFirst and United Economy Plus and in the airline's enlarged overhead bins, while spotlighting United co-workers in the cockpit and the cabin.

A third, Built Around You, shows the features of United's cabins - extra-legroom Economy Plus seating, flat-bed seats in United BusinessFirst, in-seat power and seat-back in-flight entertainment - being configured around customers on board.

The fourth, Satellite, highlights the company's global satellite Wi-Fi now on many aircraft and rolling out fleetwide, which offers customers access to in-flight Internet connectivity over the oceans and almost anywhere in the world where United flies.

The campaign also features print, radio, out of home, digital and social media including the United Hub and United's Facebook,Twitter, YouTube, LinkedIn and Instagram channels.

The campaign will also be visible across United's sponsorship portfolio, including the 12 NFL teams United flies, the New York Marathon and the professional basketball and hockey teams the airline sponsors.

Each ad relates a United product or service feature to the word "friendly" -- such as legroom-friendly, nonstop-friendly, and Wi-Fi-friendly -- demonstrating how United delivers flyer-friendly options in many forms.