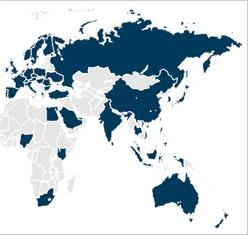 The U.S. far surpasses the rest of the world when it comes to eCommerce readiness. But Central European countries are surprisingly strong contenders for near-term online shopping expansion, according to a new global readiness study of 55 countries from Forrester.

China ranks high largely because of the sheer size potential. The nation’s eCommerce environment is considered below global average and its retail sales per capital are among the world’s lowest, Forrester notes. But with 1.4 billion people and increasing levels of disposable income, it could outpace the U.S. in the coming years, the report suggests.

Though countries within regional groupings often resemble one another, cultural, geographical, and government policies affect consumer adoption and use of different technologies, the study concludes.

Poland, according to Forrester, has a larger retail opportunity than Brazil, with 35% online buyer penetration compared to just 14% in Brazil. What's more, Polish consumers are showing a growing appetite for online activity -- with 31% year over year growth in the number of Facebook users. In addition, 9% of businesses have already taken their products online.