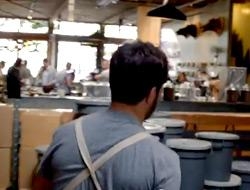 Progressive has launched a new brand extension that is unlike anything consumers have seen from the company before.

The insurance company’s perky sales clerk, Flo, is missing from the spot.

The effort, called “The Thread,” is a brand extension that introduces consumers to the real company behind its popular, apron-clad icon. This initiative is a step outside of Progressive’s traditional creative and characters in an effort to tell the world more about who they are as a company.

The first Thread TV ad, “Everything,” launches this week during prime time network premieres, including “The Voice” and “Big Bang Theory.” Next week it will air during “Modern Family.” Future media buys include the finale of "Amazing Race" and during the American League Championship Series.

The spot poses the question “what does an apron have to do with car insurance?” Following a series of people from diverse professions as they go about their daily jobs, the spot establishes the apron as a symbol for the hard work, pride and dedication that Progressive -- and all people who make progress -- have in common.

This is the first time Progressive has done anything like this, said Jeff Charney, chief marketing officer at Progressive.

“Flo has made Progressive a household name, but if you look behind the veil of ‘Superstore,' there's a real company and real people behind it,” Charney tells Marketing Daily.

“The Thread” will layer on top of the “Superstore” messaging, telling the story of the company and the people, he says.

“That’s what consumers are really looking at now -- the company behind the advertising,” Charney adds.

According to a recent Harvard Business Review study, 64% of consumers who said they had a relationship with a brand said shared values was the primary reason. People want to know who they’re doing business with, he says.

“Flo educates our customers about Progressive Products, Services and Value, while ‘The Thread’ focuses more on the kind of company Flo works for,” Charney says. “We use Flo’s iconic apron to represent Progressive’s values of hard work, pride and dedication -- values that are shared by those we have highlighted in the Apron Projects.”

In conjunction, Progressive is launching the Apron Projects to recognize people outside of Progressive who, through their work, make progress by making things a little better.