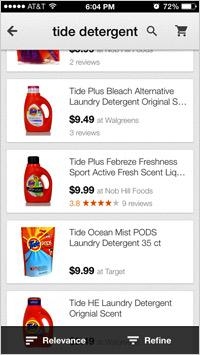 Google Shopping Express is designed to compete with similar tests from Amazon and eBay. It allows shoppers to order items on the spot online or in an app and have them delivered to their homes same day. Shoppers designate a delivery window, and the items arrive via a fleet of vans branded Google Shopping Express.

The app we played with allows you to search for specific items and then lists them by price or relevance across multiple vendors. The shopper can find bargains from multiple shops and have them aggregated by Google into a single delivery. Free trial membership gets the user free delivery for now, but non-members pay $4.99 per store used. Google was not specific about future plans for membership pricing.

A decade after online same-day delivery pioneers like Kozmo went belly up the concept has returned with the force of three of the major online players. Google’s test is similar to Amazon’s Local Express Delivery, which already serves 11 major metro areas. Ebay Now delivers from select retailers in about an hour to the San Francisco and New York City Markets.