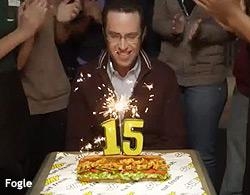 Subway, Olive Garden and Sonic Drive-In are ranked highest by consumers when it comes to the effectiveness of their ads, according to a new report from food industry research and consultancy firm Technomic.

Technomic monitors consumer perceptions of 120 leading restaurant brands across 60 attributes on an ongoing basis, using its online Consumer Brand Metrics tool and a nationally representative sample of more than 130,000 consumer restaurant visits to date. (All of a brand's consumers, not just core users, are surveyed.)

Technomic notes that Subway's advertising spending levels (estimated at $516 million in 2012 per AdAge Data Center), while a significant contributor, are not the only factors in consumers' perceptions. (McDonald's, with estimated 2012 spending of $957 million, ranked 16th.)

A key factor in Subway's advertising success appears to be its combined use of its "Famous Fan" athlete spokespersons and "real-life" spokesman Jared Fogle.

"Featuring athletes who are authentic brand advocates and an every-day guy on a 'Subway diet' [has] created very memorable and relatable advertising campaigns," observes Technomic. Subway's creative agency of record is MMB.

In some respects, perceptions of Subway's advertising buck the general trends. Technomic reports that consumers' overall ratings of "memorable" and "relatable" advertising across all restaurants measured declined between Q1 2012 and Q2 2013, while the proportion of consumers who agree that a chain they visit has advertising that makes them hungry has held steady at nearly three-
fifths of those polled.

In comparison, Subway's advertising has exceptionally high "memorability" and "relatability" ratings, and lower ratings on "makes me hungry."

Technomic notes that while Subway's better-for-you "Eat Fresh" messaging "may not inspire the same cravings as, for instance, images of pizzas or burgers," Fogle seems to resonate with consumers on both relatable and memorable levels. And the star athletes/spokespersons no doubt contribute to memorability: Subway wasn't an official Olympics sponsor, but its extensive, training-themed ads leading up to the Olympics likely contributed to its high memorability scores in Q2 2012.

Subway has also succeeded in using newer formats and media, points out Technomic.

Examples include its integration partnerships with "The Biggest Loser," "Chuck" and "Hawaii Five-O," and its original short-video comedy series on Hulu.com, "4 to 9ers," which reached 10 million views and inspired a sequel series.

The report also points to Subway's extensive social media reach (currently showing 25 million-plus Facebook fans and 1.6 million-plus Twitter followers), and notes that it was named #1 in Vivaldi Partners’ list of the top 25 brands with the greatest social currency.

"This positive social currency extends the reach of the brand’s messages while building goodwill, which most likely helped Subway weather this year’s storm of negative publicity surrounding the actual length of a 'Footlong' sub, Technomic observes.

Taco Bell (23rd), Wendy’s (26th) and Burger King (39th) were further down the list, signaling that these brands’ advertising is not connecting as successfully with consumers, says Technomic. However, Taco Bell’s composite score increased by 10 percentage points from Q1 2012 to Q2 2013, likely fueled by the brand’s “Live Más” campaign and the launches of each new flavor of Doritos Locos Tacos.

The report, "Perceptions of Restaurant Advertising: Consumer Assessments of the Leading Chain Brands," can be downloaded from Technomic's site