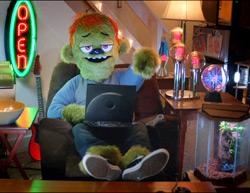 Having previously characterized aging or inefficient appliances as energy-wasting monsters, Philadelphia power company PECO is now pointing to consumers as being the next generation of monsters.

In a new television, radio, out-of-home and online campaign, the utility uses costumes designed by Furry Puppet Studio in Brooklyn to turn regular people into (friendly) monsters. In a TV spot, a homeowner is characterized as a wasteful monster by running the dishwasher with only one fork in it, and turning on too many lights.

After he reforms his ways, the suit drops away, and he becomes a regular man again. (The kicker of the commercial shows his kids — who neglect to close the door when they come in from the outside — as junior monsters.)

For the out-of-home executions, the agency used lenticular paper to show the homeowner as either a monster or a man depending upon the viewing angle. “We're already seeing engagement [with that ad] that you don't always see in a bus shelter ad,” Joshua Torrisi, senior vice president, management director at Tierney, the Philadelphia agency behind the campaign, tells Marketing Daily.

The campaign introduces homeowners to the utility's Smart Home E-Audit, through which they can monitor and track their energy savings and usage through online tools (while also getting customized energy saving tips and comparing their usage to other homes in the neighborhood.)

The strategy is a tricky one because it points the finger directly at the consumer to change his or her ways, but in a way that doesn't alienate or shame them.

To do that, the agency adopted the previous campaign's “playful tonality,” which positioned inefficient appliances as energy-sucking monsters, for this effort. That previous campaign, which  began airing in 2009, helped PECO's customers save a collective $268 million and reduced their electricity usage by more than 1.2 billion kilowatt hours, according to the agency.

“For the past couple years, we've been highlighting the energy-guzzling monsters in people's homes, but to introduce the new E-Audit, we needed them to look at their own patterns,” Torrisi  says. “We know consumers are craving this kind of access and control.”