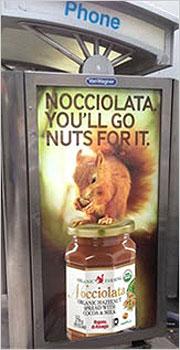 ing giant squirrels on the streets --and it's not just an early Halloween costume trend.

Public kiosks/phone booths all over the city are sporting a poster of a squirrel sitting atop a jar of Nocciolata Organic Hazelnut Spread, with the message: "Nocciolata. You'll Go Nuts for It."

The posters are intended to serve as teasers for upcoming sampling events.

During the weeks of October 21-27 and November 4-10, brand representatives will hand out Nocciolata samples in specially designed promotional "pouches" at four busy intersections in Manhattan and two in Brooklyn.

Miami, Fla.-based Rigoni di Asiago USA is the American subsidiary of Rigoni di Asiago SPA, a 90-year-old Italian company that is, according to the company, the leader in the organic honey and organic fruit-spread market (Rigoni Organic Honey and Fiordifrutta Organic Fruit spreads). Rigoni di Asiago entered the U.S. in recent years.

Nocciolata -- launched in the late 90s -- is of course a competitor to the well-established, dominant Nutella spread, from Ferraro.

Rigoni di Asiago positions Nocciolata as being superior to other nut-butter brands because it is 100% natural and made only of organic raw ingredients (USDA certified organic) without the use of chemical processes or artificial flavors; has no trans fat and no palm oil; and is made through "36 hours of artisan processing."

It's also promoting that Nocciolata is GMO-free and gluten-free.

According to Rigoni, in Manhattan, Nocciolata is sold at Whole Foods Market, Fairway, Gristedes, Food Emporium, D’Agostino and other independent stores, and is widely available in natural and specialty food stores and supermarkets throughout the U.S.