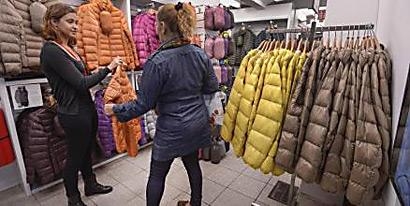 A Uniqlo store in a subway station? The kind of place where kiosks for magazines and Kit-Kat bars prevail? Talk about culture shock. But the retailer -- whose Manhattan store is on Fifth Avenue, cheek by jowl with high-enders like Armani, Benetton, and Henri Bendel -- is indeed establishing a beachhead underground. It's part of a new program from New York's Metropolitan Transit Authority (MTA) to give retailers short-term leases at station stops.

The MTA said the pop-up stores, the first of which is Uniqlo's space at the multi-line hub at Union Square, will generate revenue for the authority while it is waiting to fill the spaces with long-term lessees. Uniqlo's outlet opened Tuesday.

The program began, per the authority, with a concept in July featuring a media outlet for independent publishers called The Newsstand, which was given a spot at the Lorimer Street and Metropolitan Avenue station in (where else?) Williamsburg, Brooklyn.

“Our goal is to bring new and exciting shopping experiences to our customers, and we want to provide New Yorkers with the opportunity to shop for cold weather clothing in the subway before they have to head out into the winter weather," said Larry Meyer, COO of the Japanese brand's U.S. division, in a statement.

The MTA says the stores, which are being rented as-is, are meant to be about display, not so much for transactions, to the extent that retail customers will be encouraged, in some cases at least, to make their purchases online or at larger stores off site.

“Pop-up stores will provide a fresh and beneficial element to our stations while also improving the image and desirability of retail space in the subway,” said MTA chairman and CEO Thomas F. Prendergast, in a statement. “This is another example of the MTA working to make better use of its real estate portfolio and improving the subway environment for customers at the same time.”

MTA Real Estate Director Jeffrey B. Rosen added that the program will especially appeal to young riders, who make up a growing percentage of Manhattan's demographic. “They are savvy about shopping online. Retailers want to reach them where they are, which is our subway system.”