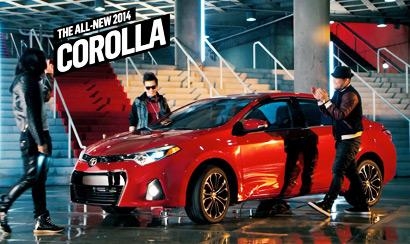 When Toyota nixed the Echo subcompact, and created Scion as a way to bring younger people to the automaker, the eponymous brand had little to offer 20-somethings. Now Toyota's go-to vehicle for Millennials is Corolla, especially the totally redesigned 2014 model. That go-to includes Asian-American Millennials and Gen Yers.

To reach that crowd, the company is about to launch a campaign for the 2014 Corolla that features a Korean-American hip-hop group, Aziatix. The effort, handled by Toyota's Asian-American AOR interTrend, features the trio's first U.S. single "Baby, Let's Go," which happens to align, thematically, with the automaker's brand campaign  "Let's Go Places." The song reached hit #4 on iTunes’ U.S. hip-hop chart.

The effort comprises a 60-second TV spot with a 30-second version, plus digital, radio, print, out of home, and a music element on Pandora. There is also a three-minute music video of the band doing the single and flash banners leading back to Toyota's Corolla site.

David Chung, Toyota Motor Sales' national manager for targeted advertising and strategy, tells Marketing Daily that the campaign extends a strategy Toyota has been using for several years that puts music at the center of marketing campaigns meant to appeal to younger Asian Americans.

"What we have found is that the popular common denominator is music," says Chung, adding that, for example, the company in 2011 created a music campaign using an anime character who sings (with help from Hatsune Miku artificial-voice effect technology.) Last year, the company partnered with Korean pop star Kim Hyun-A, best known in the U.S. for her role in Psy's “Gangnam Style” video.

Says Joe Min, account director at Long Beach, Calif.-based interTrend, "We looked through a roster of Asian groups, and we landed on the Aziatix; they are a good fit, and they have a strong following globally and have just made their debut single here."

Chung says the campaign includes an online sweepstakes where fans can download the new Aziatix' song and vie for tickets to the band's spring concert in Los Angeles, and a VIP grand prize including backstage passes to the invitation-only event.