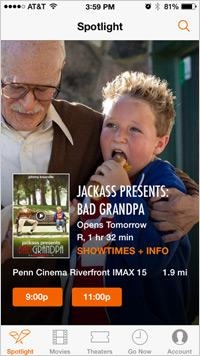 If you are looking for a bleeding edge of mobile commerce acceleration, then movie houses may be your ticket. Movie discovery and ticketing app Fandango tells us that 40% of the tickets it sells are now bought on devices. This is up dramatically -- 63% -- since the same time last year.

And apparently youth are driving this m-commerce trend. As we come into the weekend, Fandango tells Mobile Marketing Daily that 51% of its ticket sales for the "Jackass Presents Bad Grandpa" flick this weekend will come from mobile devices. That is all being driven by demographics. While the older-skewing hit “Gravity’ saw about 35% of Fandango ticket sales coming from mobile, most horror films as well as comedy and films targeting urban audiences see higher-than-average ticket sales coming from devices.

The obvious upshot here is that younger users are more comfortable making purchases on devices. It may also have something to do with advance planning and age. Greying moviegoers like me are making “Gravity” plans most likely well in advance and at the desktop. Younger users most likely are both choosing films and making overall plans closer to the point and time of purchase.

Fandango shared its insights on mobile ticketing as it launched its iOS 7 version of the venerable app. Even before this version, Fandango has been downloaded 38 million times.

The new version of the app uses a full-screen flip-card interface to ratchet through the highlighted current films. There is more direct access to ticketing from the front page as well as a showtime counter that ticks off the minutes until the movie starts once you purchase tickets. Predictive search speeds up all queries. There is also a new Go Now tab that surfaces all of the films that are about to start closest to you. And Fandango has been creating more original video content for the app that gives industry news and film previews. Fandango says that its video views on mobile have increased 18% month-over-month.