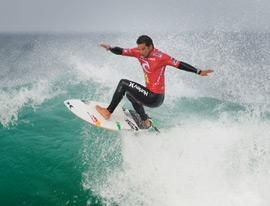 The Association of Surfing Professionals (ASP) will start riding bigger waves next year. The pro-tour organization, which hopes to become something like the NFL of wave riding, is launching a major rebranding and media program that binds a lot of pro surf competitions together under one banner.

Next year, the organization, which runs all three major global surfing tours and is in 45 countries, will activate on new international and national media deals that put competitions and content -- self produced -- on ESPN, YouTube and Facebook, with digital, broadcast, and social media elements.

Besides a three-year deal with ESPN the organization also has a new look, logo and interim tag, "It's On." The goal is a bigger stage for ASP's roster of 26 tour events across men's, women's and big-wave arenas in Australia, Brazil, Fiji, Indonesia, Tahiti, U.S., France, Portugal, Chile, Peru, South Africa, Spain and Mexico.

The program launches with content around next year's Quiksilver Pro Gold Coast, per Michael Lynch, CMO of the Los Angeles-based organization, who formerly was head of global sponsorship at Visa. Lynch, who isn't a surfer (yet), tells Marketing Daily that 2013 has been a transition year for the 36-year-old organization. "This year has been about building the programs, evaluating what's not working, doing market research, securing media deals, and getting commercial partners and sponsorships."

The ASP's YouTube channel and rebuilt ASP Web site will have 3,000 hours of embedded programming, and 26 live-streamed events annually across the men&'s ASP World Championship Tour, the women's ASP WCT and the ASP Big Wave World Tour, per the organization.

Lynch says the ASP found through research via Repucom that there are 130 million “hand raisers,” and 120 million bona fide fans of the sport. He says the new platforms will help turn the former into the latter. "The mission is very simple and straightforward: we are in business to celebrate and grow the sport worldwide; there's a potential to have some 250 million real fans." He says that with the media deals, the organization can "shape what surfing is, its stories, and heritage."

A major part of this will be social media, he said, with live streaming of events on ASP's Google/YouTube channel and other video-friendly platforms. "For the first time, surfing has one global home from digital standpoint. This was so critical for us.”

Lynch predicts sponsor involvement will extend beyond endemic brands like Billabong and O'Neill, and the surfing brands will soon have much larger sponsorship opportunities. "The endemics are title sponsors of events, but, in the past, in order to be sponsors, [brands] had to go to each event, which competed with each other and didn't share best practices since they were competitors. Now we own the events, and are aggregating audiences. And because we have these media platform deals, next year for the first time a brand can sponsor regionally, nationally, the webcasts, the broadcasts, through geotargeting, own it in the U.S. or on a global basis."