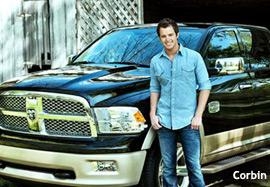 Like most automakers with a pickup truck on dealer showroom floors Chrysler Group, LLC's Ram division fuels up with country music. The hub of Ram's efforts is its "Ram Country" channel on Yahoo Music. Ram launched the channel with Yahoo in 2010; the truck brand is sole sponsor and Ram Country was also portal's first dedicated country channel when it launched.

The most recent element of its program around country is a supporting role for one of the musicians it has been involved with, Mercury Records recording artist Easton Corbin. Ram is backing Corbin's tour of FFA (Future Farmers of America) chapters around the country as part of Ram's "Year of the Farmer" program.

Ram's involvement includes a webisode series, "All Over the Road to the ACM Awards," that documents his 12-market tour. The automaker is adding a new video episode every two weeks. The effort includes a sweepstakes to the Academy of Country Music Awards in Las Vegas April, of which Ram is a sponsor.

The visits began in August and will continue through February. Each event held so far has had 300-500 FFA members attending, per the automaker.

The sweepstakes -- which launched Oct. 21 -- continues until February, and gives three winners a shot at the all-expense-paid trip to the awards show April 4-7, plus tickets to attend an invitation-only Ram Country concert with Easton Corbin, tickets to the ACM Party for a Cause Festival and tickets to the ACM Fan Jam where Academy of Country Music artists perform live during the awards telecast, per Ram.

Ram began working with Corbin in 2012 with "Ram Road to the Ram Jam," live and online program leveraging its relationship with Yahoo. Corbin was one of the five country music artists featured in the program that spotlighted each of them through the year, then featured each of them in a concert in December in Nashville.

The automaker launched the "Year of the Farmer" initiative in February when it ran the Super Bowl ad that featured an authentic recording of famed radio folk philosopher Paul Harvey waxing romantic about the American farmer set to shots of farms and farmers working them. The goal is to generate $1 million for the National FFA Organization.

Country music is table stakes in the pickup market. Ford has sponsored Toby Keith for several years and has a heavy presence at his concerts. Chevrolet's Silverado has gotten mileage from singer/songwriter Will Hoge, whose song "Strong" is integral for the new campaign for the 2014 model of the truck.