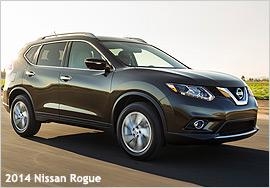 For the launch of its 2014 Rogue crossover, Nissan North America is doing something beyond the company's traditional college football strategy around its sponsorship of the Heisman Trophy.

The campaign for the Rogue includes some experimentation with digital startups via a sub rosa program in its interactive marketing office called the Marketing Innovation Lab. The Lab hit the ground running the spring and is overseen by Nissan North America's Director of Interactive Media Erich Marx. The idea: find and support upstart companies and apps with media and marketing promise.

Marx tells Marketing Daily that the inspiration for the Lab came from what brands are already doing. "We noticed that more and more strong brands -- companies like Home Depot and ATT -- are taking an interest in technology and marketing startups before they've 'made it'," he says. "We saw an opportunity."

He notes that the Innovation Lab program also dovetails nicely with the company's "Nashville Proud" initiative to support arts and culture in the city, and Tennessee's own efforts to make the region a digital hub. Nissan was exclusive sponsor in June of Nashville's inaugural Southland conference, central Tennessee's version of SXSW.

"We decided that Nissan in being a good corporate neighbor, should take interest," says Marx, who adds that Nissan met with 25 marketing visionaries at the conference and partnered with eight of them.

One is Stadium Stock Exchange, an app that lets people play college fantasy football by owning faux stock in a college team. If the team does well the stock goes up. Nissan is exclusive sponsor and advertiser. Marx says the position aligns with its Heisman House marketing campaign around college football. "We felt this worked well because it aligns with our title sponsorship of the Heisman," he says. Nissan has "Nissan Heisman House" branding on the app, among other things.

The automaker is also partnering with food startup plated.com, which hopes to mine a niche in gourmet-style heat-to-serve food delivery. Marx says that in addition to ad placement Nissan will sponsor tailgate-inspired menus for the college football season. Nissan will take the program to its own social networks and have a brand presence on the company's Web site.

Marx says deciding which app to tap for partnerships means weighing whether the CPM's garnered from a short term beta-type program beat those obtained in core marketing activity; if it amounts to innovation at an efficient price; if it offers ideas Nissan can apply to bigger programs.

"The point we take to executives is whether or not there's business value delivered [by paying a fee to test their platform and lend the Nissan name] even if they don't make it. It's a small risk that could deliver value even if they fail."

He says the holy grail is taking an equity stake in the most promising companies. "If we can pay $25 grand for a 10% stake and they go and get five million from venture capital we get twenty times return. Our executives love the idea as long as the investment levels are small and we are delivering business value. And innovation is our core value."