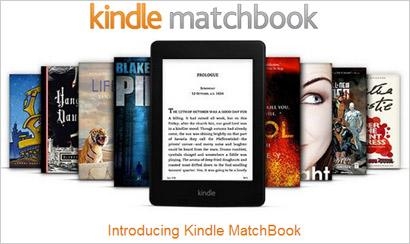 Amazon has made good on its earlier promise to let print book buyers get cheap ebook versions as an online upgrade. The MatchBook program announced several months ago went live today. It allows an Amazon customer to upgrade any eligible purchased title going back to 1995 with an ebook version for prices ranging from 99 cents to $2.99. The rub is “eligible titles.” Amazon’s publishing partners need to agree to the plan, so only 70,000 titles from the Amazon catalog are upgrade-able. Amazon boasts that when the program was announced in early September, only 10,000 titles were enrolled. Publisher partners include Macmillan, Houghton Mifflin Harcourt, and HarperCollins as well as Marvel and Wiley.

A tool available at the Amazon.com/kindlematchbooks page will survey a logged-in user’s past purchase history to find back titles that are eligible for the upgrade.

In our informal test of the service with a personal account, a good 15 years of frequent Amazon book purchases rendered 7 titles we could upgrade. The titles with MatchBook enabled included literary titles from authors such as Denis Johnson, Ian McEwen and A.M. Homes. But there were also titles like Neil Gaiman’s American Gods and Joshua Piven’s The Worst-Case Scenario Survival Manual.

Ultimately, the principle behind this mode seems sound. Amazon is recognizing that the purchaser of a physical good has some claim on the digital version, but not without additional cost. This is a question magazine companies have anguished over in authenticating print subscribers for access to digital editions. Most print consumers feel they should not “pay twice” for the same content. They often balk at additional fees for a digital version of a magazine they already subscribe to. Some -- but not all -- publishers acquiesce and give the digital edition as a value-add.

But is the enhanced functionality, storage flexibility, convenience and additional content of a digital version of print media really the same product being paid for twice? Amazon’s $3 and less digital upgrade of a purchased book seems to me a fair way to acknowledge that first high analog fee buys a consumer universal rights to the core content of a work. But without some supplementary cost for the digital version (unless it is built into the original cost) then we are not placing any real value on digital services.