Nissan GT Academy Lines Up At Flag For Third Year 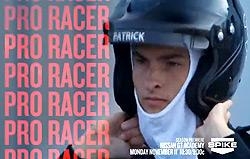 Nissan's racetrack reality-show GT Academy is back for season three. The program touts Nissan's performance pedigree and its NISMO (Nissan Motor Sports) marque, while giving some white-knuckle gamers the chance to take a racing career from zero to 160, or from digital to real.

The show, premiering on Nov. 11 on Spike, is a "Survivor" type narrative pitting 12 finalists -- who won their spots by outracing a few hundred thousand other people on PlayStation 3 Gran Turismo 6 -- against each other for a chance to be professional racers under Nissan's banner.

Taking place at the Silverstone track in the U.K., the finalists get a combination of Navy SEALs type physical, psychological and athletic challenges and on-track training and racing in Nissan 370Z NISMOs, Nissan GT-Rs and the Nissan JUKE NISMO. The end game is a chance at becoming a "NISMO Athlete," a professional driver in a Nissan car. The series airs as five 30-minute episodes and culminates with a one-hour finale in mid-December.

Ex-NFL player Dhani Jones hosts the show in which racing stars Danny Sullivan and Boris Said serve as judges along with with former racer and GT Academy instructor Rob Barff.

To support, the automaker is doing a Nissan GT Academy First Person online experience that uses video and motion tracking to make engaging with the show an interactive experience.

Nissan AOR Santa Monica-based TBWA\Chiat\Day created and produced the show in conjunction with OMD, RadicalMedia and Critical Mass. Brian O'Rourke, executive producer at TBWA\Chiat\Day LA, tells Marketing Daily that the agency is promoting the show but also trying to walk the fine line between talking about it and spray painting "Nissan" all over it. "We want to consider it content, not a commercial. We have done some advertising for the 370Z that does allude to GT Academy, but majority of stuff we do is promos and promotional content."

O'Rourke says the show has found a good home on Spike, to which it moved the content in 2012. "It was really successful last year. The first year we had it on Speed and that worked out well, but we have done some research and found that the [GT Academy] resonated really well with Spike's viewers; the amount of positive response it got was great, and is transferred to Nissan as a brand."

A big change this year is that the NISMO name itself is getting top billing, which makes sense as the automaker is giving it a bigger focus in the U.S. with the NISMO-badged Juke and Z. "We pushed NISMO this year," says O’Rourke. "We are calling all winners 'NISMO Athletes' when they win to become professional race car drivers. In the first two years it was 'Nissan GT Champions.'"