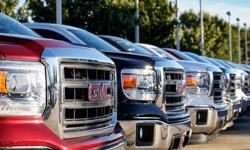 Auto sales in October gained compared to the month last year, but there is at least one event that tempers those numbers: Mother Nature's wrath. Still, a lot of automakers posted best-ever Octobers, so there's no reason to think the numbers are fibbing.

Jessica Caldwell, head of industry analysis at Edmunds.com, says new car sales are probably around 1.2 million for the month, up about 10.4% versus last October and 6% from last month. "But last month was unusually short, and last year was Sandy. So the numbers don't paint an accurate picture."

On the more salubrious side of the balance, incentives are very low and there's no strong holiday associated with October, so automakers have not been floating a lot of deal messages. "Combine that with anticipation for those holiday deals, and there are reasons to see that buyers would have held back," she says, adding that there is no reason whatsoever to think that sales are going to slow down heading into the final lap of 2013. "Holiday messaging is already starting; it's coming earlier and earlier, and if the past is any indication the year end sales will bring a strong crowd, so October could actually have been hindered by that anticipation of deals."

Caldwell also pointed out that better fundamentals helped truck sales. “Trucks are seasonally strong, but lower gas prices helped.” Ford sold 191,985 vehicles in October, posting a 14% increase versus a year ago, with the critical sales -- retail -- up 15%. Ford said it was the best retail sales performance since 2004. Sales of the F-Series topped 60,000. Lincoln, which had been struggling even to get noticed, sold 2,909 vehicles -- a 38% increase, with MKZ increasing 80% versus a year ago.

General Motors sold 226,402 vehicles -- up 16% versus a year ago, with retail sales up 16% but with fleet sales up 14%. The automaker's car sales were up over 32% and trucks were up over 10% for GMC Sierra and Silverado. GM says strong calendar-year-to-date numbers have helped Chevrolet and GMC earn a 30% share of higher-priced light-duty pickups.

Chrysler Group posted an 11% increase compared with last year. The automaker said it was the best October sales since 2007 and that the Ram Truck brand’s 22% increase was the largest sales gain of any Chrysler Group division.

Hyundai's October sales were up 7% versus the same period in 2012, giving it its best October in company history.

Toyota sold 168,976 units -- an increase of 4.8% increase over the month last year, with RAV4 the biggest gainer for the month while its top seller Camry dropped slightly.

“Consumers showed resiliency in October with steady auto sales despite headwinds caused by the government shutdown,” said Bill Fay, general manager and group vice president. “The growth in the auto industry continues to play a leading role in the economic recovery.”