Burgundy Is Back - For Whole Dodge Lineup 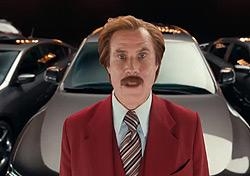 Chrysler, LLC's Dodge brand, is back with more ads featuring Ron Burgundy, the feckless reporter played by Will Ferrell in “The Anchorman.” Two of the four new spots feature the anchorman pitching the entire Dodge auto lineup -- Dart, Durango, Charger, Challenger; two of them keep a focus on the new 2014 Durango SUV, for which the Burgundy campaign was launched in early October.

As in a previous spot, Burgundy is clueless about how to pronounce things. In one spot he’s sure "Dodge" is pronounced "Yodge." Two of the four 30-second spots extend initial short-form videos that launched the campaign -- one in which Burgundy berates a horse for only having only one horsepower, the other in which he can't understand or pronounce MPG.

It appears the campaign has worked quite well in lifting both buzz and consideration versus  the average for the domestic competitive set, per YouGov's BrandIndex, which takes a dipstick to the market, measuring auto brands’ buzz and purchase consideration. The survey-based study rates buzz on a -100 to 100 scale based on queries to people who who plan to buy a car in the next six months.

While Dodge has been moving up in both buzz and consideration since mid-September, so has the competitive domestic auto sector (Ford, Chevy, GM, Jeep, Buick, Chrysler, Cadillac, and Lincoln), per the firm. But Dodge inched past the rest in both measures right after Oct. 15, a few days after the campaign had launched.

By Oct. 21 Dodge buzz was at 21, versus 13 for the whole auto business; consideration for the brand, meanwhile reached 20%, though that is still below the high-water mark of 26% in July when the division was running a clearance campaign and had some ads out there starring rapper Pit Bull, who had also appeared in a campaign for sibling brand Fiat.