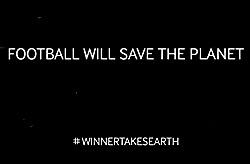 Next year, it may come down to our soccer prowess to keep from becoming enslaved by aliens. Samsung is putting together a soccer dream team in hopes of defending the earth from alien invaders/players who have challenged us to a “Winner Takes Earth” match.

Having revealed itself as the company behind a series of alien-like symbols and messages with the line “#WinnerTakesEarth,” Samsung will begin revealing the players for its earth-defending team (dubbed the Galaxy 11) in the coming weeks. (The first reveal is scheduled for Nov. 11; international soccer star Franz Beckenbauer will serve as the team’s coach.) “The fate of the Earth hangs in the balance, and I fear the winner takes the Earth,” Beckenbauer says in a video on the campaign’s web site. “It will not be our military or our science that will be our salvation. It will be football that saves the planet.”

The campaign will run across a number of Samsung’s Galaxy devices, online platforms, social media channels and a dedicated campaign microsite (www.thegalaxy11.com), following the recruitment and training of the team as they prepare for the Earth-defending match. Though details were minimal, fans from all over the world will have several opportunities to watch, follow and participate in the campaign.

The effort began in October as mysterious circles and the #winnertakesearth hashtag began appearing on iconic locations such as Sugarloaf Mountain in Rio de Janeiro, Brazil; billboards in New York City and at soccer pitches at Hackney Marshes in London. Mysterious robed figures (now revealed to be the aliens) were also seen at several high-profile soccer events over the past week.

The campaign is part of Samsung’s long-standing commitment to supporting soccer, particular in the run-up to the World Cup next summer. Since 2005 Samsung has been a supporter of some of the most prominent and visible soccer teams around the world, including relationships with: Chelsea FC, Real Madrid, Bayern Munich FC, Juventus FC and many other national leagues and teams.

“Football is one of the most popular sports in the world and Samsung admires the power of football as a unifying force to rally and connect a global community of passionate fans,” said Younghee Lee, executive vice president of Global Marketing, IT & Mobile Division at Samsung Electronics, in a statement. “Through this one-of-a-kind campaign, Samsung wants to combine fans’ universal love for football and GALAXY devices. I hope this campaign helps stimulate your imagination, inspires engagement and opens up exciting moments.”