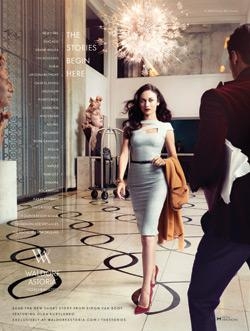 The actress, who has four films in the pipeline for 2014, is featured in three print ads, which are based off a short story written by Harper Collins author Simon van Booy.

Each execution represents a vignette from the story entitled “The Escape Artist.” To further engage consumers and provide greater depth to the campaign, the full story comes to life on a dedicated parallax Web site with behind-the-scenes video and interactive content.

The campaign, which includes a multimillion-dollar media plan , also includes social media, including a contest and a Facebook tab. It will be shown in the United States, the United Kingdom, United Arab Emirates and Chinese media outlets.

Titled “The Stories Begin Here,” it was shot by fashion photographer Bruno Dayan.

In the campaign, Kurylenko plays a character named Alexandra, created exclusively for her by Van Booy as a young, successful and well-traveled couturier, spending time experiencing unforgettable moments at a Waldorf Astoria hotel.

The story takes readers on a journey through the eyes of Alexandra as she encounters the many inspirational environments and bespoke service a Waldorf Astoria offers.

“We have brought together a writer, an actor and a photographer -- three creative minds -- to develop an integrated multiplatform campaign that embodies the Waldorf Astoria guest experience,” Foster says in a release.

The campaign brings to life, through still and video assets across print, digital and social channels, “the kind of unforgettable experiences awaiting each of our guests at 24 inspiring destinations around the world,” he adds.

The integrated marketing and communications campaign illustrates Waldorf Astoria Hotels & Resorts’ unique positioning as the luxury portfolio of hotels that create exceptional experiences, each providing the personalized attention that is the source of unforgettable moments that add up to an extraordinary experience that could only happen at a Waldorf Astoria.

Shot on location at the Waldorf Astoria Chicago, the digital and print execution exemplify caught moments -- “vignettes”  -- from the bespoke tale: Alexandra’s arrival and chance encounter in the lobby; her moment of inspiration en suite; and a relaxing moment in the hotel’s spa.

The next chapter of the campaign will continue to tell Alexandra’s story, and is scheduled to be produced in early 2015 at another iconic Waldorf Astoria property.