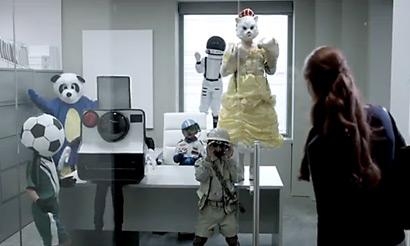 Another first for the bank is the overt use of humor, says Deborah Van Valkenburgh, PNC senior vice president of strategic brand management.

“We all have conversations in our heads, especially about money management,” Van Valkenburgh tells Marketing Daily. “We thought humor would be a great way to bring the indecision and lack of control in a way that people could identify with.”

The goal of the spots is to get consumers to say: “Wait a minute -- I have that same problem. How can I solve it?”

Six 15-second videos promote the bank’s mobile and online money management tool, Virtual Wallet. Banner ads drive customers to the videos, and they will also appear as pre-roll to other YouTube videos.

PNC will also engage the audience through more traditional online tactics such as tie-ins with their social media, display banners and search ads.

The new initiative, dubbed the "Be the Boss" campaign, aims to empower current and prospective customers (in this case, successful young families and Gen X/Y) to be the boss of their money and how they spend, pay off debts and save.

Debt and personal finances are topics the average person tends to avoid. So to stand out, PNC partnered with iCrossing and Phil Morrison (director of famous Mac vs. PC character spots for Apple) to create the videos with actors from Manhattan-based improv group, "The Upright Citizens Brigade."

The videos personify an array of everyday scenarios relevant to the PNC customer. For example, the nagging "Bill," the gruff "Mortgage" character and tie-dyed "Student Loan," who question their owner amidst struggles with financial priorities.

“We wanted to speak in a way that was authentic and relevant to our target,” Van Valkenburgh says. “We are trying to marry the art of persuasion -- the emotional connection, along with the science and data.”

Another first for the bank is using “Big Data” to connect with prospects and their specific financial "pain points" and needs, Van Valkenburgh says.

The campaign begins by rolling out the series of 15-second spots, followed in a few weeks by the 30-second spots and eventually the 60-second spots, which will be targeted strategically to demographics based on tracked online habits.

“We wanted to create a way to tease people to be more curious to discover more,” she says. “The videos will drive them to landing pages. After they go to the landing page, we will be targeting them as they go elsewhere in their online journeys, and present them with uniquely designed offers.”

The campaign might eventually be taken offline to other media.

“We’re in test mode,” she says. “We’re looking to see how the market responds, how the consumer responds, do they share it with others."