These “Bro-surance” ads first surfaced three weeks ago, under the auspices of The Colorado Consumer Health Inititative and ProgressNow Colorado to bring attention to their website.

To me, the whole thing --from the subgrammatical “do you got” to the triad of brazen, fist-pounding idiots on the keg stand -- screamed parody, as if it had to be the work of the Onion or the writers on “Jimmy Kimmel Live.”

Short of parody, perhaps it was something scarier. After all, basing a contemporary ad campaign on a take-off of “Got Milk?” has only been done maybe 10 million times, even by those with no awareness of American advertising or the English language.

Could it be the work of German or Eastern European dissidents getting us back for the NSA scandal?

Certainly, the open-mouthed homunculi shown in the ads (especially the one wearing a version of Old Glory on his shorts) could easily pass for what a non-American thinks of the worst of wild-and-crazy USA frat-boy culture.

Or, closer to home, could it be a brilliant scam by a secret Tea Party organization masquerading as the Colorado Health Exchange?

Really, how could pro-ACA ads possibly try to sell us on points that play so aggressively into all the anti-Obamacare  “entitlement” hysteria?

“Keg stands are crazy. Not having insurance is crazier. Don't tap into your beer money to cover those medical bills. We got it covered” reads the body copy for the first.

That’s followed by the even-less-believable ad showing similarly low bro-i-ness, with the body copy “ Yo Mom, do I got insurance? My girlfriend broke my heart, so me and the bros went golfing. Then my buddy broke my head. Good thing my mom made sure I got insurance."

Making sure you’re covered so that you can still pay for copious beer and golf outings so trivializes the genuine need for health care that it’s hard to believe these were ads not written by Rand Paul.

But sadly, they are for real. And unfortunately, now they have a sister act. Last night, a new flight of ads was released, including the worst one yet.  Et tu, bro-te? 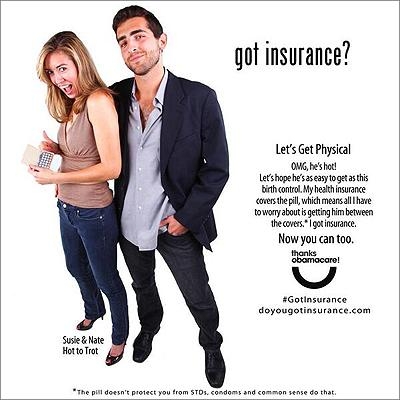 Called "Let's Get Physical,” the ad shows characters named "Susie" and "Nate" over the words  "Hot to Trot." Susie gives us a demonic look as she extends a vigorous thumbs up while holding a container of birth control pills wide open, like her mouth.

"OMG, he's hot!" the ad reads. "Let's hope he's as easy to get as this birth control. My health insurance covers the pill, which means all I have to worry about is getting him between the covers. I got insurance."

I appreciate that the creators of the ad wanted to show women as independent, sexual beings. And certainly, one of the selling points is that the insurance companies can no longer think of being female as a “pre-existing condition.”

But this set-up plays right into the hands of all the misbegotten thinking of Rush Limbaugh’s attack on Sandra Fluke last year. Remember, she wanted birth control to be covered by insurance, and he recast it as wanting someone “to pay for her to have sex,” and from there got to talking about prostitution

Young women also use birth control for myriad other health reasons, having nothing to do with preventing pregnancy. To show it as a way to justify the random pickup of man meat comes right out of that same, douchy bro-culture playbook as all the rest of the ads—she’s just another drunken, sex crazed bro, yo. (Or as many on Twitter have already branded her, a “ho.”)

That’s ironic. By trying to be pro-sex, the ad brings out the oldest woman-hating move there is: slut-shaming.

I give these ads a scarlet letter “F.” Really, they are an embarrassment to any evolved human being and a pathetic pander to millennials, who deserve better.