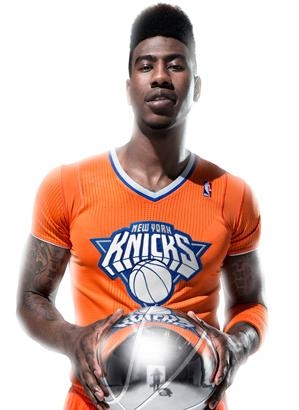 The sports gear company is backing the NBA holiday "BIG Logo" uniform game-day pageant where all 10 teams playing on Christmas Day will don the dedicated jerseys designed for the “BIG Logo” Holiday Collection.

Social elements are on Twitter and Instagram at @adidasHoops and @NBA using #NBABIGXmas and Adidas' Facebook page for hoops. The league said the new ad has the players -- dressed in the "Big Logo" uniforms -- doing a humorous redux of “One-horse Open Sleigh” through a series of choreographed three-point shots.

"Last season’s 'BIG Color' holiday campaign was an overwhelming success that grabbed fans' attention, and we wanted to find a way to top it,” said Jamie Gallo, NBA EVP, marketing. “This season, we’re back with the game’s biggest stars to deliver an engaging and festive sequence that creatively showcases our players' skills.”

The spot starts live on the league’s digital platforms this week and will air across the league’s national broadcast partners ABC, ESPN, TNT and NBA TV, as well as its regional sports networks, the League announced. The NBA, which has been on an international strategy program for several years, will also air international versions of the spot in key regions including China, Europe, Mexico, Brazil, Africa, and the Middle East.

A spokesperson noted that the NBA and adidas signed an 11-year global merchandising partnership making the adidas brand the official uniform and apparel provider for the NBA, the Women’s National Basketball Association (WNBA) and the NBA Development League (D-League) beginning with the 2006-2007 season.

The skinny (so to speak) on the collection: Warm-up jackets and shooting shirts that feature print graphics inspired by knit holiday sweaters. The warm-up jackets feature team logos on the front chest and BIG team logos on the back, both made of chenille patches. Sales for the apparel on NBAStore.com, the NBA Store on Fifth Avenue in New York City, and team retailers started Nov. 14.