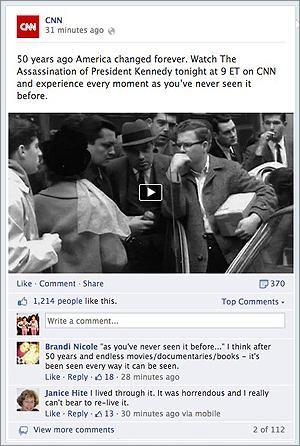 If they haven’t already, news organizations had better embrace social media -- and Twitter in particular -- if they want to reach young consumers.

In general, social media news consumers report getting their news from a variety of sources -- in some cases, more so than the general public -- according to new findings from the Pew Research Center in collaboration with the John S. and James L. Knight Foundation.

Facebook and Twitter news consumers, however, are less likely to rely on other sources (and cable news especially) than users of YouTube, LinkedIn and Google Plus.

Most notably for news companies, the research shows that Twitter news consumers are both significantly younger than news consumers on Google Plus LinkedIn, and even Facebook, and are among the least likely to turn to local and cable TV.

In other words, the findings suggest that the newest generation of news consumers prefer to get their fix in bits and bites -- and on the go.

Indeed, news consumers on social-networking sites are more likely than the general public to use a mobile device for news, including roughly half of Twitter and LinkedIn news consumers.

That said, Twitter still only makes of a small share of all news consumers. Presently, the newly public company only reaches about 16% of U.S. adults, while only 8% of U.S. adults use it for news, by Pew’s estimate.

A clear majority (62%) of reddit users rely on the site for news, but it only reaches about 3% of the U.S. population -- translates to 2% of the population.

Conducted toward the end of August, Pew’s research included a sample pool of more than 5,000 adult respondents. The survey questionnaire was written by Pew and administered by GfK using KnowledgePanel, its nationally representative online research panel. For each social networking site, “news consumers” were defined as those who answered that they “ever get news or news headlines on [name of Web site].”