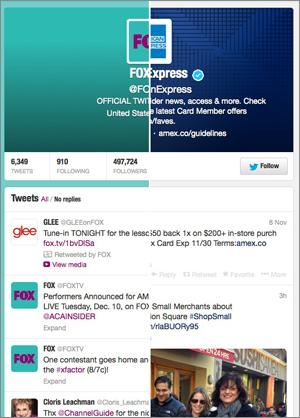 Fox has signed American Express under the Twitter Amplify initiative, providing near live TV content as soon as it airs to the social media site.

The marketing/promotional effort will focus on Fox’s greatest moments around a number of its TV shows, with current TV clips/content -- soon after that content airs on the network -- sent to Twitter users and TV fans.

The American Express-sponsored effort is the first of its kind for scripted entertainment programming, according to the companies. Fox shows included in the deal: “Glee,” “New Girl,” “Bones,” “The Mindy Project,” “Brooklyn Nine-Nine,” “So You Think You Can Dance?” and “Masterchef.”

Twitter Amplify is a social media program looking to increase awareness for TV networks by connecting viewers to TV content and social media activity. Networks' longtime TV advertisers, such as Fox’s alliance with American Express, can leverage the activity, as well.

A number of other networks have signed with Twitter Amplify since it was announced earlier this year, including BBC America, Fuse, The Weather Channel, A&E Networks, CBS and Bloomberg TV.

One of the first Twitter deals of this kind occurred last year with ESPN’s football clips; it included ads for Ford’s Fusion. Other TV content that has appeared on Twitter includes MTV Video Music Awards and the NCAA March Madness basketball tournament