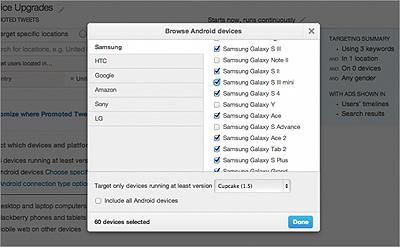 It's no secret that mobile plays a large part in Twitter’s business, with two-thirds of the company’s ad revenue coming from the mobile side. Twitter is rolling out expanded targeting options for mobile advertising that go beyond a user’s operating system.

The company said this week it will now give marketers the ability to target ads to Twitter users based on the specific version of iOS or Android their phone uses,  their specific device and whether their device is using a WiFi connection.

How will companies use the additional insights to tailor ads? Twitter gave some examples, such as app developers that want to reach people who have OS versions and device types best suited to app usage.

Telecom marketers, meanwhile, could promote loyalty and rewards offers to users on their specific devices, or seek out new prospects on older devices.

More broadly, marketers can focus ad efforts on device models associated with particular demographic groups they are trying to reach through their campaigns.

Twitter is also introducing more granular analytics reporting that reflects the enhanced targeting. A screenshot of the updated dashboard shows Twitter already allows advertisers to target by other criteria, including location, gender and interests. But with respect to devices, it now provides metrics like impressions and engagement rate by specific devices like the Samsung Galaxy S III, HTC One or LG Optimus, among others, as well as different OS types.

“The new segmentation reporting gives advertisers better insight into the OS versions and specific devices of users engaging with your general campaigns -- and that in turn can inform how you optimize future campaigns,” Kelton Lynn, ads product manager at Twitter, stated in a blog post Wednesday.

The new targeting capability is available now through ads.twitter.com under the standard mobile targeting filters in the campaign setup. It will be released soon through Twitter’s Ads API partners, the company said